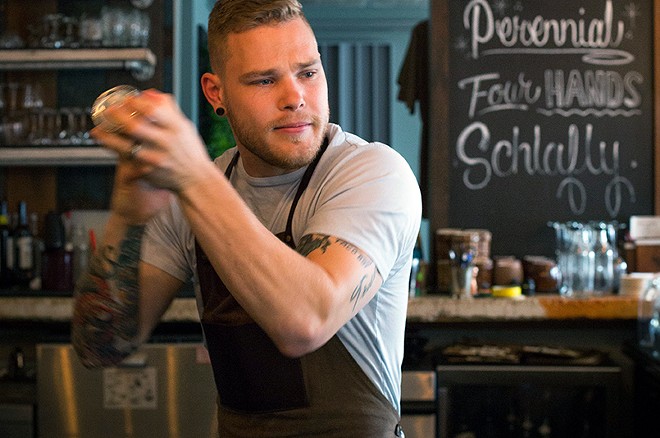 PHOTO BY MONICA MILEUR
Retreat Gastropub's Tim Wiggins shakes a mean cocktail — and that's not all.

"I loved beer and all, but I had absolutely no interest in becoming a bartender," Wiggins says today. "He kept insisting that I try it, though, and finally I was like, 'OK, I'll try.'"

These days, it's hard to imagine Wiggins in any other role. If you ask anyone in the city's restaurant industry — or the national cocktail scene, for that matter — to name St. Louis' top bar professionals, Wiggins is always on the short list. He's turned Retreat Gastropub into a destination for thoughtful cocktails and is an encyclopedia of all things spirits.

However, it wasn't that long ago that Wiggins was on an entirely different career path. "I thought I was going to go into advertising and communications," Wiggins recalls. "I was dead-set and was in the advertising club in high school. I was part of this student organization that competes and won state one year and districts the next. It was unexpected because I'd stumbled into all of this success, and I figured it was what I should do."

After graduating from high school, Wiggins attended St. Louis Community College at Meramec with plans to transfer to Columbia College in Chicago. However, at the last minute, his funding for the program fell through, preventing him from attending the program. He was devastated. "I felt like the world was ending," recalls Wiggins. "I had this year off with nothing to do, so I decided I would leave the country to get some perspective."

Wiggins traveled to New Zealand, an experience that allowed him to get away from his disappointment and to clear his mind. When he came back to St. Louis and reality, he needed a job and applied at Baileys' Range. "I'd never worked in a restaurant, but oddly enough, Travis hired me," says Wiggins. "I started out as weekday support staff, then started serving and after six months, I was bartending there."

Though it took some initial coaxing to get him behind the bar, Wiggins thrived once he was there. He began to learn everything he could about wine, beer and spirits and even traveled the country to check out other bars, drinks and best practices. "My personality is that, everything I do, I have to do 100 percent," Wiggins admits. "I have to be able to answer every question, and I fell in love with the whole idea of creating things and hospitality."

When the owner of Baileys' Range, Dave Bailey, opened his vegetarian whiskey bar Small Batch, he tapped Wiggins to be the manager. Again, he felt a bit reluctant. "I was completely ill-equipped and was in charge of people who knew so much more than me and had worked in the industry twice as long," Wiggins says. "But I was thrown into the fire and it was great. That's where I decided that if I was going to do this, I was going to really go for it."

During his time at Small Batch, Wiggins kept in touch with his former boss, Howard, and they would sometimes discuss opening a restaurant and bar. At first, Wiggins didn't take the musings all that seriously, but eventually, Howard began to get a plan together and offered him the opportunity to create and manage his concept's bar program. Wiggins could not resist.

The pair got to work creating what would become Retreat, though Wiggins credits Howard with giving him free rein to do whatever he thought was going to work the best. "Travis is really good at hiring people who know what they are doing and they letting them do it," Wiggins says. "He told me that he wanted an American bar, and whatever that meant to me was what I was supposed to create."

Though Wiggins put some serious R&D into the drink program, the thing he's most proud of at Retreat is the culture of hospitality he and his team have created. "I want Retreat to have a warm, welcoming feeling that makes people feel like they belong there," Wiggins explains. "I think the hospitality aspect is just as important as the alcohol."

However, those cocktails are what have put Wiggins and Retreat on the map — and they even give him a creative outlet that he feels is not all that different from what he experienced during his advertising days. "It's funny because I loved creating headlines, and now I am creating cocktail names," Wiggins says. "It's so much fun to see how strange you can make them and still have people order them. How you lay out the menu and how it reads is the same as advertising. It's all about what does it evoke and how does it make people feel. Sometimes, I feel like I'm doing the same thing, just through a different outlet."

Wiggins took a break from the bar to share his thoughts on the St. Louis food and beverage scene, the one type of bar that the city is missing and why there is a time and a place for crappy diner coffee.

What is one thing people don’t know about you that you wish they did?
I am a semi-famous hip hop artist in the U.K.

What daily ritual is non-negotiable for you?
Kissing my wife and two kittens goodbye and goodnight.

If you could have any superpower, what would it be?
Teleportation. Ain’t nobody got time to travel.

What is the most positive trend in food, beer, wine or cocktails that you’ve noticed in St. Louis over the past year?
Not only this past year, but something I think St. Louis does well is collaboration. It is great to see breweries, restaurants, spirit-makers, etc., working together to create mutually beneficial projects.

What is one thing missing or that you’d like to see in the local food and beverage scene?
A rum-centric restaurant and bar. I can’t wait till someone opens one.

Who is your St. Louis food or drink crush?
Richard Vagnino, formerly of Reeds American Table. He is brilliant and an all-around great guy.

Who’s the one person to watch right now in the St. Louis food and beverage scene?
Andy Hille of Rockwell Brewing. Andy’s beers are innovative and delicious. Everyone should be looking closely at what he is doing. I can’t wait for Rockwell to open.

Which ingredient is most representative of your personality?
Luxardo Bitter Bianco. It is a nice balance of subtle sweetness and aggressive bitterness.

If someone asked you to describe the current state of St. Louis’ food and beverage climate, what would you say?
On track. It is exciting to see newer restaurants like Vista Ramen and Vicia doing different and exciting things that help progress the industry. It is great that you can’t just open a restaurant and not give the bar attention anymore —well, not if you want to be busy. Overall, the industry is definitely on track and trending in the right direction.

Name an ingredient never allowed behind your bar.
Bad ice. Better to have no cocktails than cocktails with crappy ice.

What is your after-work hangout?
Most often my couch with my wife and a four-pack of Busch tall-boys. Although, I have been known to grab a beer and a shot at the Scottish Arms after work.

What would be your last meal on earth — including drinks of course.
Surf and turf tacos at Oscar's Mexican Seafood in San Diego paired with a gallon pitcher of negronis.