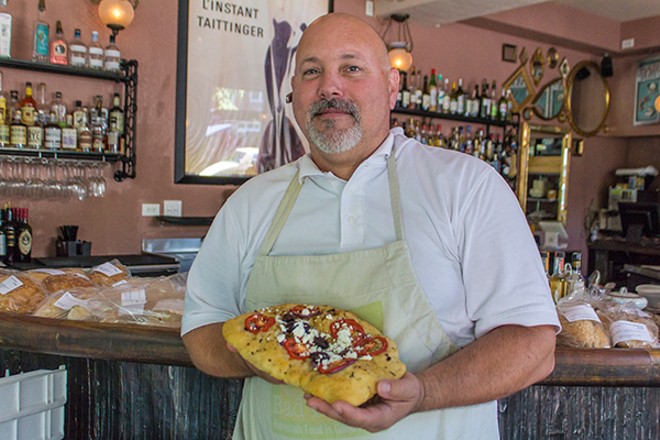 "I never knew how entrenched farming could be in a human being until I plowed ground one day," Willsey explains. "I was plowing some land to make room for heritage grass I was getting ready to plant, the aroma of turned party just hit me at such a base level. It was odd — and hugely impactful."

An unlikely farmer and bakery owner, Willsey grew up in Pittsburgh and worked for many years in the printing industry. Though he led a comfortable life, the distance prevented him from being able much time with his brother in Kansas City and his parents in St. Louis. "We never got to see each other," he says. "This isn't the way life is supposed to be."

Willsey's mom, who'd retired from the defense mapping industry, had always wanted to raise alpacas, and the two began researching plots of land and potential agricultural industries. They found an old farm in Missouri that had been used to raise Peruvian horses, and Willsey moved to the area.

However, his mind — or rather his heart — was not entirely in Owensville. When he left Pittsburgh, he'd left behind a girlfriend, Terri, who was insistent that she didn't want a long-distance relationship. The two soon realized that they didn't want to be apart, and Terri moved out to Owensville to help Willsey with the farm.

A real estate agent by trade, Terri had always enjoyed cooking and even had a small catering business before she moved to Owensville. When she arrived, she began canning, earning a cult following for her relishes and jellies.

She and Willsey decided to begin making bread under the name Hummingbird Kitchen as a way to add value to their jelly business. To their surprise, that side of the business quickly took over. "The bread side exploded," Willsey explains. "In 2015, we had to expand the bakery."

Willsey describes Hummingbird as a bakery that caters to pockets of people around the state. "We have groupies everywhere," he laughs. Because of their proximity to Hermann, they supply its bed and breakfasts and some of its vineyards with provisions. Other customers include campers on their way to an area lake.

The St. Louis side of the business is also growing, as Willsey and his wife now offer their breads and pastries at the De Mun Farmers Market, City Greens, the Webster Groves Farmers Market and Meshuggah Cafe in the Loop. Though the exposure is making them contemplate expanding their capacity yet again, he insists they will only do so if they can avoid mass production.

Willsey took a break from the bakery, the alpacas and the sheep to share his thoughts on the St. Louis restaurant scene, the secret burritos on offer at De Mun Oyster Bar and why he can't rest until the livestock can.

What is one thing people don’t know about you that you wish they did?
That I'm part of the baking team and actually bake bread.

What daily ritual is non-negotiable for you?
We make sure all of the livestock chores are finished before we eat.

If you could have any superpower, what would it be?
The ability to compress time. Running out of time before everything is finished is a weekly occurrence.

What is the most positive thing in food, wine or cocktails that you’ve noticed in St. Louis over the past year?
An increase in both the demand and supply for locally sourced ingredients.

What is something missing in the local food, wine or cocktail scene that you’d like to see?
An advertising medium that would allow artisans to promote their creations, inexpensively, that could be accessed online by potential customers.

Who is your St. Louis food crush?
Dan Sammons at De Mun Oyster Bar. He does incredible back-door burritos on Saturday mornings — interesting flavor combinations with a great portion size.

Who’s the one person to watch right now in the St. Louis dining scene?
Chef Rex Hale of Boundary. He's a great supporter of the buy local scene and does a great job of facilitating an environment of creativity.

Which ingredient is most representative of your personality?
Sun-dried tomatoes. We source tomatoes locally, in season, and dehydrate them for usage throughout the rest of year. They're tart, sweet and get along with almost everything!

If you weren’t working in the restaurant business, what would you be doing?
Controlled environment farming, growing produce twelve months per year.

Name an ingredient never allowed in your kitchen.
Dough conditioner — though really, just about any chemical. If we can't pronounce it, we don't use it.

What is your after-work hangout?
Our deck, watching the sheep graze.

What would be your last meal on earth?
Lamb tenderloin, smoked and cut as medallions, over a bed of angel hair pasta with a white wine reduction. Steamed asparagus. Challah rolls with butter. Flourless brownie topped with vanilla bean gelato and crushed hazelnuts.