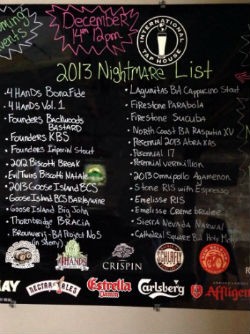 If you're looking for that perfect gift for the beer enthusiast in your life, you can't do much better than taking them down to the International Tap House's (1711 S. 9th Street; 314-621-4333) annual "Nightmare Before Christmas," held this Saturday, December 14, at the Soulard location and the following Saturday, December 21, at Chesterfield location -- both events begin at noon so be ready for a full day of imbibing. Read on for our recommendations and the full list.

The tap list for this event, chock-full of some of the top rated beers in the country, is guaranteed to impress even the snobbiest of beer geeks. For this Saturday's tapping down in Soulard, look for Goose Island's Bourbon County Stout (the beer that caused all the excitement on Black Friday) and BCS Barleywine, Evil Twin's 2012 Biscotti, the oh-so-wonderful Firestone Parabola, Founder's 2013 Kentucky Breakfast Stout and Stone's Expresso Imperial Russian Stout. Local favorites will also be on hand, including Perennial's much ballyhooed 2013 Abraxas, Schlafly's Imperial Coffee and Cathedral Square's Bourbon Barrel Holy Moly.

The theme here is "big and scary beers" -- translation, dark and heavy. These rich beers were brewed with coffee beans, aged in bourbon barrels and infused with smoke. Here's the full list of what will be available to help you plan your attack.