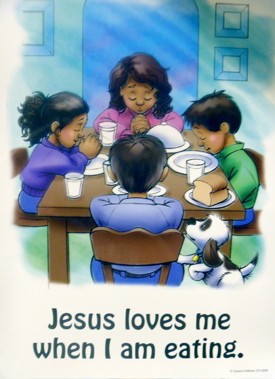 A sign on the wall just outside the St. Richard's School cafeteria.

Here's a secret, one you probably already know: Not every Jew keeps kosher. As a matter of fact, some eat an awful lot of treyf and believe that life isn't worth living if it doesn't include cheeseburgers, bacon and sausage pizza. Oh, and barbecued ribs.

But when the Jewish Light, St. Louis' Jewish weekly, decided to expand its interfaith horizons and rate the Lenten Friday fish fries at local Catholic churches and declared the one at St. Richard's Catholic Parish in Creve Coeur the best, it touched off what we professional journalists refer to as a shitstorm among the paper's readers.

"What Jewish values are presented by comparing which fish fry has the best shrimp and catfish?" wrote Joan and Jules Stiber.

"In the Jewish universe, Friday night is for Shabbat, not fish-fry hopping," Ellyn Goldman Ross put in. "St. Louis Jewish families choose their own ways to recognize Friday night as the beginning of the Sabbath. But it is really offensive to have a Jewish institution organize against traditional ways by reviewing Friday-night dining at area churches."

Naturally Gut Check, a connoisseur of fish fries, as it happens, had to check out St. Richard's.

A friend who had already visited St. Richard's this fish-fry season warned us that the place is crazy busy. So we decided to show up fashionably late, around 7 p.m. Even with daylight-savings time, that was cutting it perilously close to sunset and the start of the Jewish Sabbath, but we figured the Jews who hewed close to that rule wouldn't be visiting Catholic fish fries anyway.

By the time we arrived at St. Richard's, parking spots had opened up in the lot, though we could see remnants of earlier crowds in the form of cars parked along Schuetz Road. But inside, we only had to wait a couple of minutes before we were allowed into the school cafeteria. (It would have been shorter, but there were some extremely indecisive people in front of us.)

We would have waited way longer for that fried cod, though. We're talking some of the best fried fish that's ever melted on Gut Check's discerning palate: crisp and spicy on the outside, tender and moist on the inside, and not the least bit fishy. We could clearly see how it had seduced the writers from the Jewish Light.

The sides were less exciting, but they were all-you-can-eat, which is something. At the free-dessert table, we scooped up a plastic-wrapped cupcake. "Is this any good?" we asked the elderly woman supervising.

Well, then. We took it anyway. And it was just OK.

The St. Richard's fish fry felt about as Jewish as every other fish fry we've been to. That is to say, not very. (Though, to be fair, aside from taking place in a church school cafeteria, it didn't feel very Catholic either.) We couldn't gauge the exact number of Jews because our Jew-dar, like the cupcake, is only just OK, and it would have made us feel creepy to go up to people and say, "Excuse me, are you Jewish?" It would have made us feel even creepier to climb up on a table and announced, "Any Jews here? Atand up and be counted!" 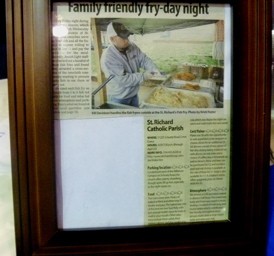 But. At the bar, we saw a picture frame, right next to the sign advertising peel-'n'-eat shrimp, three for a dollar. Looking closer, we noticed that someone at St. Richard's had framed the Jewish Light article.

"Oh, that's nice!" says Jewish Light editor Ellen Futterman when we tell her about it during a phone call to compliment her taste in Lenten fish fries and also to ask whether if she'd anticipated such an angry reaction from readers.

"It was just intended for fun," Futterman says of the article. "And we're printing some letters this week from people who were glad we did it." For more context, she directed us to a letter from Larry Levin, the paper's publisher/CEO that appears alongside the angry outcries in last week's issue.

We'll spare you the suspense. In the face of criticism, Levin is unrepentant. He writes:

I can't apologize for something we did wrong when I don't believe we did. We didn't endorse Catholicism. We didn't take a position on matters of the Catholic Church (though we have, many times, in the past). We didn't connect fish fries to historic persecution of Jews, and you know why? Because we are honestly not aware that modern-day, community-based Catholic fish fries have contributed in any way to persecution of Jews. To offer such a position is no different than saying that all Jews should be held responsible for the fraudulent conduct of a Bernie Madoff.

Levin also pointed out that the Jewish Light covered a number of issues of Jewish interest in the issue that contained the fish fry piece, including an article that "took on over 100 Missouri legislators to protect the rights of religious minorities" and coverage of the opening of the new Chabad on Campus house at Washington University.

"[The fish fry story] got a lot of attention," Futterman tells Gut Check. "I wish it hadn't. Some really important stories got ignored."

But none of the others (except the Chabad story) recommended a spot for a really good, cheap Friday-night dinner.