iTap's New Location in the Central West End Outdoes Itself 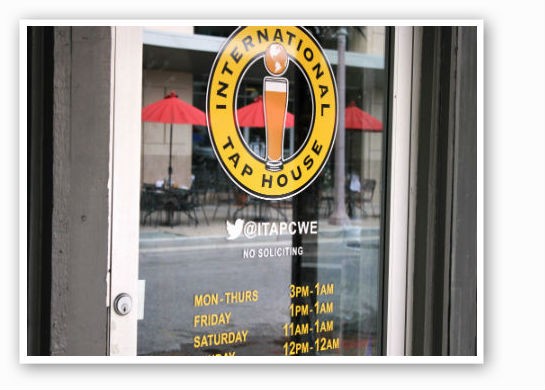 Following its mission to bring a gigantic selection of craft brew to the beer drinkers of St. Louis, the International Tap House (16 North Euclid Avenue; 314-367-4827), or iTap, is upping the ante, expanding its sphere of influence with a new location in the Central West End. After a soft opening on Monday, July 8, the iTap-CWE is running on all cylinders and is ready to pour out as many pints as you can drink.

Jason Chew oversaw iTap's newest venture, and says that in comparison to the Soulard and Chesterfield locations, the Central West End site "just has a different look to it, just a completely different layout." We would describe it as iTap on steroids: roughly 3,500 square feet, with soaring ceilings, three levels filled with tables, chairs and couches, and about 30 flat-screen TVs. Chew also points out the additional 20 taps at iTap-CWE (61 total), so you can be sure to find your favorite style.

The Central West End, with its walkable dimensions and robust nightlife, seems like a pretty good spot for a beer bar. "It's a neighborhood that we haven't tackled," Chew explains. "We had so much luck with the Soulard location, which is a completely different scene, and we really just started looking for neighborhoods that we weren't involved in." Sure enough, iTap-CWE is booming -- its business is beer, and business is good.

Continue for specials and more photos.

You can count on the familiar weekly specials, including Tuesday's "Local Brewery Night" that features discounted Missouri brewed drafts and bottles from 8 p.m. to close. And of course, there's the iTap Passport, which tracks the new beers you drink by stamping your beer passport. Build up enough stamps and iTap WILL REWARD YOU FOR DRINKING BEER with T-shirts, engraved nameplates, street cred and drink specials so you can, you know, drink more beer.

A view from above | Pat Kohm

So consider yourself informed: iTap-CWE is ready and waiting. Take this knowledge that Gut Check has bestowed upon you and flourish.