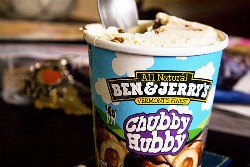 In addition to offerings cones of its signature ice cream flavors, the chain will also give out samples of its new Greek frozen yogurt. For comparisons sake Gut Check investigated the nutrition differences between a half-cup scoop of Ben & Jerry's ice cream (New York super fudge chunk, a favorite) and the equivalent amount of its Greek frozen yogurt (raspberry fudge chunk) and were pleasantly surprised to find that the Greek frozen yogurt, while still a total dessert gimmick, cuts the calories, fat grams and cholesterol levels in half, if not more. Still, Free Cone Day at the Delmar location always creates a 20 minute wait with a line that snakes down the street, so you have to wonder: is free fro-yo worth such a time investment, or will the real thing taste all the sweeter? As always, Ben & Jerry's asks patrons of Free Cone Day to donate a few dollars to benefit a charity of its choice.