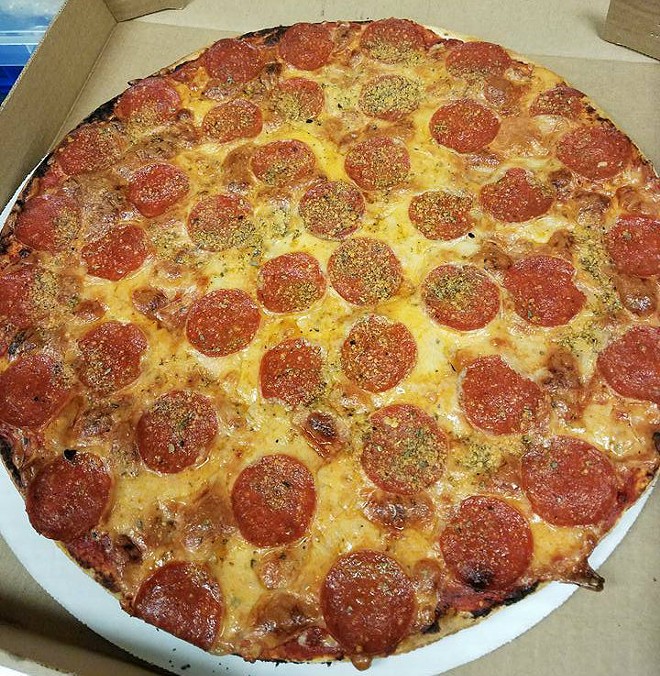 When St. Louis restaurateur George Lane moved to Florida, he had no idea that he would find a huge community of Cardinals fans hungry for Provel cheese.

But that strong St. Louis base is what inspired Lane and his wife Toni to open Jake’s Pizza in Palm Harbor, introducing Provel-topped pizza to the Tampa area even while giving transplants from the Gateway City a taste of home.

“It’s unbelievable, the response. You’d think they won the lottery!” Lane says of his St. Louis customers. “I have people come in all the time who say they’re from St. Louis and want to know how things are going. ‘We were waiting for this for so long and want you to stay,’ they say. I keep saying we’re not going anywhere!”

Jake’s Pizza, named for Lane and Toni’s youngest son, offers a variety of pizza options, including the traditional mozzarella cheese and hand-tossed crust you’d find across the nation. But the St. Louis-based menu has become the Gulf Coast restaurant’s main attraction, with locals gobbling up “the St. Louis Experience,” a full meal of goodies made famous under the Arch. With toasted beef ravioli, the "Pasta House Salad," thin-crust Provel-topped pie and gooey butter cake, the spread hits a Yadi-style homerun.

“We get a lot of response on the gooey butter cake, and we make those in-house,” Lane says, whose father worked for years for the Affton-based Haas Baking Co., famous for its version. “We have a lot of people who aren’t from St. Louis who don’t know what it is, but just the words ‘gooey’ and ‘butter’ and ‘cake’ all together sound good, you know?”

Lane, who went to Lindbergh High School, previously owned Caleco’s Bar and Grill in downtown St. Louis. Since he opened Jake’s Pizza last summer, he says it has become a gathering spot for displaced St. Louisans in the Sunshine State. During a recent four-hour shift, he estimates that nine customers from the Gateway City dropped by, and many exclaim the same thing: “I didn’t know there were any St. Louis folks around here!”

“I’m like, ‘See that table over there? They’re from St. Louis. That table’s from St. Louis, that one, that one,” Lane laughs. “We actually just started a Facebook group for St. Louis transplants in Florida, and we’re going to keep putting people in there who say they haven’t met anybody.”

But it’s not just St. Louisans who are digging the Provel magic at Jake’s Pizza — people with no connection to the Arch have learned to love the chewy cheese, too.

“I had my IT guy who’s from Chicago try the pizza, and he said, ‘Yeah, It’s alright,’” Lane recalls. “But he called me a week later and asked what I’d put in the pizza. He said ‘I’ve got to get more of it, I’m addicted to it, and I’ve been thinking about that pizza for the last three or four days.’”

Six months into Jake’s Pizza, Lane knows he’s tapped into a hungry market, and now he's looking at opportunities for additional locations. He says he'll always include both traditional and Provel pies on his menu, but he's also thinking about introducing a few more St. Louis items — like Pasta House's pasta con broccoli — to Florida.