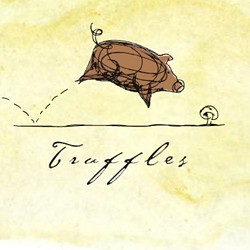 (Seriously. Go. Now. Order the housemade burrata and the roasted bone marrow to start. This post will still be here when you get back.)

Now, Griffiths' work at Truffles has attracted national attention. Specifically, it has gained him an invitation to cook this June at the James Beard House in New York.

"[The foundation] contacted us in early January," Griffiths tells Gut Check. "Someone had been in the restaurant and was interested in what we did."

Griffiths and his team are working on the menu that they'll present. What he describes as a "loose-formatted" menu is due to the foundation in April.

The advance planning is especially tricky for the Truffles crew, as the restaurant takes the seasonal approach very seriously. (Indeed, the menu changes quite frequently -- most of the dishes I would have recommended from my most recent visit, only a few months ago, are no longer there.)

"We're gauging what kind of ingredients are available locally at the end of June," says Griffiths. He adds that he's started talking with local winemakers and hopes to use the dinner as an opportunity to promote their wine to a New York audience.

Griffiths plans to take most of his kitchen staff with him to prepare the meal, which means that the restaurant will have to close down for a day or two.

The dinner will be held on Tuesday, June 26. Tickets cost $170 per person and go on sale Wednesday, March 7.