This is part one of Emily Wasserman's Chef's Choice profile of Jamey Tochtrop of Stellina. Part two, a Q&A, will be published tomorrow, and part three, a recipe from Tochtrop, will be available on Thursday. 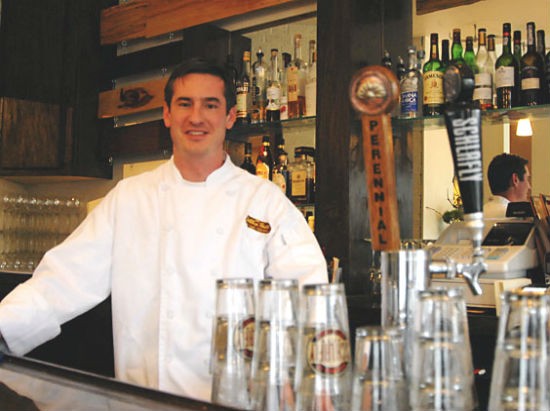 On a cold, rainy Saturday afternoon, Gut Check set out in search of Stellina (3342 Watson Road; 314-256-1600) in south city to talk to Jamey Tochtrop, the restaurant's executive chef. Located between two older buildings and surrounded by residential housing, the restaurant is a bit hard to find. The entrance is set away from the sidewalk and you feel as though if you're getting ready to walk into an abandoned house.

However, after stepping inside the restaurant, we felt as if we had fallen down the proverbial rabbit hole. Bright, vibrant paintings line the walls, and polished metal sculptures are placed around the restaurant's perimeter. Restaurant patrons contentedly munch on pastas, salads and sandwiches, and the atmosphere is at once sophisticated and laid-back.

When we comment on the paintings, Tochtrop reveals himself as the artist behind the restaurant's colorful tableaus. Apparently, there's more to both Tochtrop and the restaurant than meets the eye.

"I like to create," he comments with a smile. "Whether it's food, music or drawing. I play the drums, and I love to paint."

Tochtrop was born in St. Louis and grew up in south city -- only two miles away from Stellina. Although he's always loved to eat, he doesn't recall any special food memories from his childhood.

"I have four brothers, so growing up, it was quantity over quality. My mom made dinner, and it almost always included a cream of mushroom soup," he says with a wry smile.

When Tochtrop turned fifteen, he decided to pursue his interest in cooking by working for a catering company in St. Louis.

"I did prep work and mostly stayed in the front of the house. After working for the front of house, I decided that I wanted to go to culinary school to gain more back-of-house experience," Tochtrop says.

Tochtrop spent the next three years at Forest Park Community College, where he completed a three-year associate degree program for culinary arts and hotel/restaurant management.

"It was evolution, but I never went back to the front of the house. My full-time job has been in the kitchen ever since," Tochtrop says.

After graduating from Forest Park, Tochtrop took a series of industry jobs. He worked as a roundsman at the Saint Louis Club, the banquet chef at the Chase Park Plaza and was chef at the now defunct JaBoni's Bistro. With years of experience, including three years spent selling his own handcrafted pasta, the next step seemed logical: to open his own restaurant.

"It was a natural progression, and it was always a goal," Trochtop says. "After I left JaBoni's, I knew I didn't want to work for anyone else anymore. The building [for Stellina] became available, so we bought and renovated it," Trochtop says.

Stellina Pasta Café opened its doors in 2007 and now operates under the name Stellina. Tochtrop still makes his own pasta, and he changes his lunch and dinner menu daily. His passion for his work is apparent, as he discusses local farms where he sources his ingredients, and he stops by tables to chat with guests.

When he's not working, Tochtrop enjoys spending time with his son, who, like any typical five-year-old "asks for mac and cheese and spaghetti," Tochtrop smiles. "He has gotten less adventurous the older he gets, but he'll still eat mostly anything...except salad."

Tochtrop enjoys taking risks with his cooking and hopes to continue experimenting with fresh, local ingredients to create innovative dishes.

"In the future, I want to continue to raise the bar, and try news things," he says.