Jane Eyre and the Scottish Arms 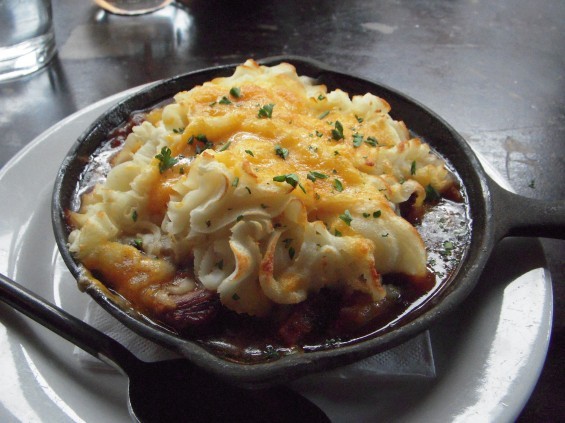 Our heroine may be "poor, obscure, plain and little" -- but that's nothing that a piping-hot shepherd's pie won't cure!

We had this idea that we'd go watch Jane Eyre and then eat Jamaican food.

We were, admittedly, feeling a bit postmodern. Since we last spent much time with Jane Eyre, we'd read Wide Sargasso Sea and been lectured at college about the fact that there are perspectives beyond those of Dead White People (even dead female ones like Charlotte Bronte). We now know that the half-caste madwoman in the attic is less a monster than a human, worthy of our empathy. We know the idea of marrying the boss is a schoolgirl fantasy, not a good career plan. And so we thought we'd watch Cary Fukunaga's new adaptation of the classic novel, starring Mia Wasikowska, and then we'd shake off the chill of the Gothic by eating jerk chicken and having a good ironic laugh.

We had forgotten that it's impossible to keep an ironic distance from Jane Eyre -- especially this Jane Eyre. (We had also forgotten, sadly, that St. Louis' best Jamaican restaurant, DePalm Tree, is closed on Sundays.)

But we'll get to food in a minute. First the movie. Fukunga's flick, currently playing at the Tivoli, is remarkably faithful to Bronte's book. Jane is indeed poor, obscure, plain and little -- first boxed around by her detestable Reed cousins, then sent to the dreadful Lowood boarding school, where chums die en masse from typhus and, one suspects, starvation. Then she goes to Thornfield -- to work for Mr. Rochester and discover her destiny.

Thank God, that destiny, in the form of the broodingly romantic master of the house himself (played here by Michael Fassbender), reciprocates. "It feels as though I had a string tied here under my left rib where my heart is, tightly knotted to you in a similar fashion," he marvels, and our heart, too, stirred.

And yet there is, of course, that madwoman in the attic. The wild thunderstorm that follows Jane's first kiss to Mr. Rochester in the film foreshadows the inevitable: The crazy Creole wife must attack. The marriage must be thwarted. Jane must flee in a bout of Christian conscience. And by the time Miss Eyre and her Rochester are united at last, he's both blind and without a mansion.

That all sounds silly in summary, but both in the book and on the big screen, it's utterly compelling. You feel, watching Fukunga's flick, that this plain little governess and this damaged man really will find happiness together -- and you believe that, when their souls cry out for each other across hundreds of miles of windswept moors, they really manage, somehow, to hear each other. There wasn't a dry eye in the house after the matinee we attended.

So there would be no irony in our post-movie dinner. Indeed, after months of gray winter skies in St. Louis and darker skies on screen, we were beginning to feel like Jane as she made her long journey across the moors: We would have given our last shilling for some good British comfort food.

What better way to recover from a day wandering in the moors -- or a movie that made us cry -- than a pot of good English tea?

And so it was off to the Scottish Arms. This Central West End British restaurant will happily serve you something exquisite, like a vegetable terrine or grilled sea scallops. But we were in the mood for the basics: a cup of hot tea, a crisply fried fish-and-chip combo, a shepherd's pie.

The pie was served in a cast-iron skillet, a perfect dish of pungently stewed lamb and carrots topped with mashed potatoes and cheese. Each forkful brought contented sighs; we were so distracted by its rich goodness that we barely managed to swipe a bite of our dining companion's haddock.

Ah, yes, when it came to that shepherd's pie on that cold St. Louis Sunday, it was an ending worthy of Jane Eyre:

Reader, we devoured it.

Sarah Fenske is the executive editor of Euclid Media Group, overseeing publications in St. Louis, Detroit, Cincinnati and Cleveland. She is the former host of St. Louis on the Air and was previously editor-in-chief of the RFT and the LA Weekly. She lives in St. Louis.
More
Scroll to read more Food & Drink News articles (1)
Join the Riverfront Times Press Club