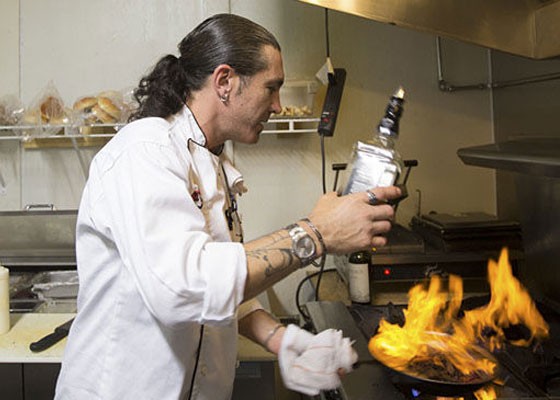 Jax Cafe (2901 Salena Street; 314-449-1995) opened in July in Benton Park, serving breakfast, lunch and brunch on the weekends. The original plan was to keep it at that and fill a niche in the neighborhood, but executive chef Brian Hale tells us that just wasn't working.

"Our weekday business for breakfast was just not any good. It just wasn't," Hale tells us. "At the end of the day, I really love doing that pretty, artistic dinner food. That's how I started off -- I did that for fifteen years here in St. Louis."

Jax Cafe marked the return of Hale, who made a name (and a bad-boy reputation) for himself at the helm of Monarch. He then took on a major gig as the head of culinary operations at the Chase Park Plaza. A 75 to 80 hour work week took its toll, and Hale took over a year off before opening Jax Cafe.

"This was first started [without dinner] so that as a chef I could have quality of life, so I could see my daughter," he says. "People kept asking me, 'When are you gonna do dinner?' So we gave in, and figured out how I can maintain a quality of life with my family and have fun doing what I truly enjoy."

It took him a while to work out the menu -- he went over 300 old menus and more than 3,000 recipes and compiled it into enough for probably four before whittling it down (whilst listening to the Rolling Stones, no less).

"This menu is a combination of some very tried-and-true things I've done for a long time and some very cool, inventive new items. I didn't want to just rehash the last twenty years of my career," Hale says. "But there's certain things like the lamb chops -- that's the first dish I ever created for Monarch, and it was probably the best seller in the five years I was there, so it went on the menu. And then there's the duck-confit egg roll, which I haven't done before, but it just makes sense."

Dinner service will cost Hale a few nights a week with his family, but he says everybody has to make sacrifies -- he's willing to do whatever it takes to make Jax Cafe viable. Plus, at the end of the say, he likes cooking what he calls "frou frou" dinner dishes. Plus, as Cheryl Baehr learned in October, he has given up his self-described "prima donna" ego.

"This whole thing was done out of love, not out of ego or wanting to be back in the papers, running around with my nose in the air," he says. "This was about family and love and putting out great food in a small place where it's quality not quantity."