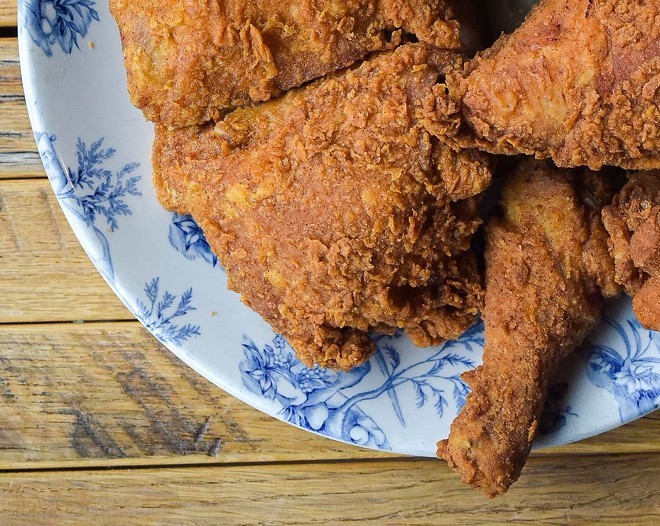 Lucas Peterson
Eat fried chicken for a good cause. It's a win-win.

As if you needed another reason to eat Juniper's (4101 Laclede Avenue, 314-329-7696) acclaimed fried chicken, chef and owner John Perkins has sweetened the deal. The entire month of January, the restaurant is running a fundraiser to benefit the Leukemia and Lymphoma Society with the goal of raising $30,000 to help fund the organization's research and advocacy efforts.

Throughout the month, Juniper guests will be able to donate to the Leukemia and Lymphoma Society by using a QR code at their table or telling their server an amount they would like to donate and having it added to their bill. One hundred percent of all money raised will go directly to the organization, which has invested over $1.5 billion in research since its founding. According to the organization's website, these efforts have helped advance 75 percent of FDA-approved blood cancer treatment options over the last five years, making it a vital actor in the fight against these diseases.

The fundraiser is personal for Perkins, who disclosed last month that he was diagnosed with multiple myeloma this past August. Though he is currently in the midst of treatment himself, Perkins still felt compelled to do something to help an organization that has been so instrumental in the very research he is currently benefitting from.

"It wasn't that long ago when my type of cancer would have been a death sentence," Perkins says. "The treatment plan I have grew out of the research the Leukemia and Lymphoma Society has done and sponsored. It has a success rate, and people are going through it and hitting remission, so in a real sense I owe my life to what they have done and want to help them continue to do what they are doing for the benefit of other people."

This is not the first time Perkins has made Juniper a hub for charitable giving. When the pandemic hit St. Louis in March of 2020, he quickly founded Meals for Meds, a grassroots movement co-organized with Knead Bakehouse's Kirsten Brown that fed area health care workers. Before partnering with the national group Frontline Foods in May of that year, Perkins and Brown managed the 27 restaurant-strong effort that both provided meals to those on the health crisis' frontlines and kept restaurant workers employed when dining rooms went dark.

Like Meals for Meds, Juniper's current fundraiser, too, serves a dual purpose. In addition to raising money for the Leukemia and Lymphoma Society, the effort has the added benefit of providing joy and encouragement to Perkins as he undergoes treatment that will keep him out of the restaurant for the next several months.

"On a personal level, knowing people are coming into the restaurant is medicine for me," Perkins says. "Support for Juniper over the next few months will be a kind of therapy while I am gone and my team is holding it all down."