The remarkable food at Capri is worth a return trip, if you can remember dining there in the first place

"What brings you to St. Louis?" a gracious hostess asked as she ushered us toward a formally appointed table for two at Capri. My friend Mike, prankster extraordinaire, instantly fabricated a yarn about a writing assignment that begat our in-town stay -- apparently we were New York Times journalists doing a feature on local scuba divers who dredge for important historical wreckage along the Mississippi bottom. I was so surprised by the question, and its underlying assumption that we must be hotel guests, that I couldn't think quickly enough to whip up my own response (plus I learned long ago to never even try one-upping a Mike story).

By the time our pre-dinner cocktails arrived, Mike and I were thoroughly entertaining ourselves coming up with other good reasons to go to Capri, other than to play Traveling Businessman. Obviously, it's the perfect secret hiding place for an affair; with no other locals around, you can take your illicit squeeze out to dinner with no fear of an inadvertent outing, then simply ride an elevator to the requisite hotel room. The combination of a fancy restaurant that's not crowded also makes for a great break-up spot -- you know: Throw 'em a nice cut of veal saltimbocca before giving 'em the boot, and limit your witnesses. It's too bad, though, that even though the food may be fantastic -- and it is, truly -- eating at Capri isn't as much fun as coming up with make-believe reasons for somebody to go there.

Since the Renaissance Grand Hotel debuted downtown in February, boasting a price tag somewhere north of $200 million -- largely publicly subsidized -- it almost seems like a concerted effort has been made to keep the citizens of St. Louis out. First you must be aware that a restaurant resides within, and that it is called Capri. You may have caught wind of a Post & Sons steakhouse that has been expected there since the spring; according to management, they have yet to decide on a space in which to locate it. (Which really makes you wonder: How much room can one $200 million hotel have, that multiple site options keep a restaurant from being built? Do doors to Narnia lurk inside the Renaissance Grand?) Then you must possess the gumption to hoof it over to the dark side of Wash. Ave. -- i.e., east of Tucker, literally the unlit end that, save for Kitchen K, has yet to see any embers from the reignited west side alight its way -- and figure your own way through the Renaissance Grand labyrinth, as there are two buildings across the street from one another that bear the chain's name, and neither has a sign for Capri outside. The host's podium outside the dining room is irregularly manned, another awkward glitch that can leave would-be customers stranded and confused. Also, finding nearby parking is a bitch.

The reward for all this determination is a near-blissful meal of Mediterranean food -- or rib eye and mashed potatoes, if you prefer -- in a highfalutin setting bedeviled at times by an ill-fitting ambiance and gauche service.

Capri bears an interior-design job so unexpectedly grandiose that taking it all in puts one in mind of how Ali Baba must have felt upon first entering the cave of the Forty Thieves. As you descend the curved marble staircase from the ground-floor lobby, your eye is simultaneously amazed by the overwhelming atrium ceiling above -- a vaulted latticework of metal and glass that rivals the prewar beauty of the ceiling in the old Grand Hall at Union Station (now the lobby bar of the Grand Hyatt) -- and the expanse of wicker armchairs, ornately patterned carpeting and creamy yellow walls below, lorded over by a quartet of story-high palm trees planted along the room's meridian.

Amid all this opulence, Midwestern conventioneers eat. Mike had a field day eavesdropping on three traveling co-workers, female, middle-aged and sporting bouffants of various heights, as they discussed their current sex lives. Blue jeans are worn by a majority of Capri's patrons, a few of whom dine alone. It's not fitting, all this visual splendor going to waste. The room awaits a regal affair but only receives small parties of salespeople.

Presented upon broad sheets of parchment, the menu carries on the ruse. When the hotel and restaurant first opened, the cuisine was unapologetically Mediterranean, with endless amounts of fish, olives, olive oil, tapenade -- what the house described as "al fresco-style dining." It didn't fly with the clientele; quickly, the bill was tempered with a pork chop, Angus beef tenderloin, barbecued pork ribs, and other macho fare. The kitchen didn't miss a beat. No matter what color the protein, or what regional origin the dish (French, Italian and Greek influences are all in evidence), Capri offers excellent food. It's pricey -- the bulk of the entrées range from the high teens to the mid-twenties, and that Angus tenderloin runs $29 -- but justifiably so. And besides, Wwe're all just going to charge this on our corporate cards and submit for reimbursement when we get home, right?

Bruschetta, which need merely show up on a table to prove a crowd pleaser, reawakens the taste buds to its earthy delights with an above-average kick of garlic. Razor-thin slices of carpaccio are so delicately baby-soft, they come apart like pieces of wet tissue; the beef is made robust by the strong, reckoning taste of the mustard-infused citrus vinaigrette it sits upon. That same mild-manly duality should be imparted to the appetizer of roasted mushrooms; alas, their pleasantly passive taste is given no competing flavor to play with. The two soups -- a chunky white bean and a cioppino (fish stew) need about two shakes of salt and pepper apiece, but the essences are all there: Each is hearty, clean tasting and well stocked. While the salads aren't quite large enough to order as a full meal, any of the four makes for a gangbuster second course: baby spinach with petite segments of red grapefruit, chèvre and chunks of smoked pancetta doing the work of usual croutons; fanlike leaves of butter lettuce accented with frisée, pear tomatoes, olives and a tart sherry vinaigrette; scrumptious hearts of romaine tossed with never-ending helpings of feta, kalamata olives, tomatoes, cucumbers and toasted pita chips; and a classic Caesar (hold the anchovies).

While a number of the entrées stick to what's trendy among today's high-end restaurant fare -- mashed potatoes aren't just mashed potatoes, they're "Yukon Gold Mashed Potatoes" -- the results back up whatever vogue choices have been made. Red meats are roasted perfectly, most notably a lusty rack of lamb, exquisitely accompanied by a generous side of warm ratatouille. Sadly, only three seafood items remain on the revamped menu, one a seafood fettuccine. A fantastic striped sea bass, fatty and flaky all at once, firmly makes the case that salmon's heyday should come to an end (if only sea bass weren't so damn pricey, both at restaurants and at the seafood counter). Maybe that is why what's most memorable about the perfectly good Atlantic salmon scaloppine is just how much salmon you get -- three fillets, each bigger than your hand.

The wines on the brief list are moderately priced, which is to say most are under $50. But there's nothing here for even the hotel guests to write home about, just ordinary wines with high markups. And the list violates the Sommelier's First Principle: No vintages are listed.

Before we get to desserts -- wait, let me just make that part simple: Order the chocolate mascarpone cheesecake, a dense, fudgelike mound wondrously paired with a scoop of pistachio ice cream -- let's go back to the beginning, where Capri's other misstep (besides the ill-fitted ambiance) starts to surface. After Mike and I placed our orders, our tuxedo-uniformed server presented us with what she told us was our "complimentary" bread basket. That struck us as a little off, and was only the first of a few faux pas committed in the service, which is wholly willing but relatively inexperienced. Silverware was sometimes taken between courses and left unreplaced until requested, and on my second visit I had to explain that Pellegrino is a brand of sparkling water.

A week after Mike and I went to Capri, I mentioned that I'd be referencing our scuba-divers tale in my review. "Your review of what place?" he asked. I repeated "Capri" twice, but he only caught on when I reminded him that it's the restaurant in the Renaissance Grand. Despite so many delicious dishes, Capri is a hotel eatery through and through -- unfortunately, its most distinguishing quality is how easily it leaves your mind. 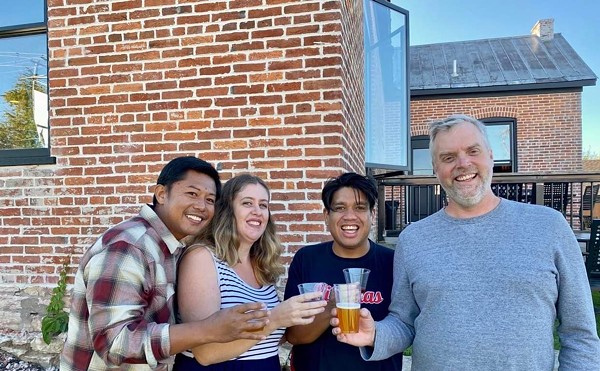