Justin Meister of Lemmons Went From Ballet to Bartending 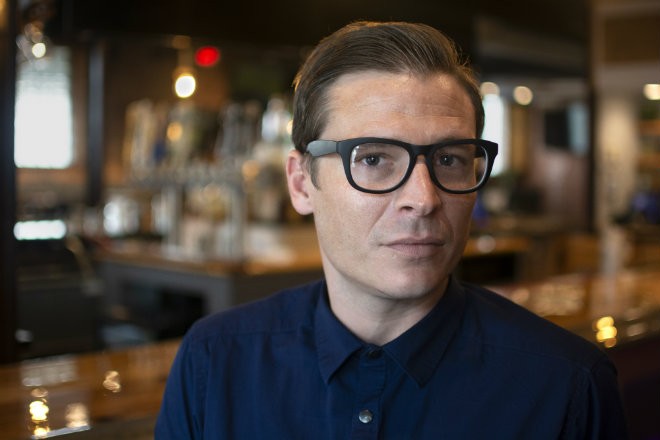 ANDY PAULISSEN
Lemmons' Justin Meister had dreams of the ballet but found his true passion in the food business.

Looking back on his working life, Justin Meister realizes that his jobs have always centered around food in one way or another. Whether it was working in restaurants, managing a Whole Foods or running the Plaza Frontenac location of the home goods store, Sur La Table, Meister has consistently found himself surrounded by the world of food and beverage — even back when he was little more than a kid.

"I remember being fifteen years old and walking to the bank from the bagel store where I worked with the day's deposit because I was too young to drive," Meister recalls. "At that age, I was already managing the place. I guess the management thing has been apparent all along."

Meister's current gig as the bar manager and all-around utility player at Lemmons (5800 Gravois, 314-899-9898) may seem like light years away from that little bagel spot, though the seeds for his restaurant career were planted all those years ago. In fact, they were planted even earlier. As a kid, he'd watch his mom cook and try to pick up what she was doing, all the while developing a passion and curiosity for food.

However, Meister wouldn't think of the food and beverage industry as a career path right away. After graduating high school, he left St. Louis for college in Chicago where he started pursuing theater, and then eventually ballet. All the while, Meister knew he had to support himself financially, so he got a job as a bagger at Whole Foods. The more he grew with the company, the more he realized it was a more viable career path than ballet.

"I had dreams of theater and ballet, but reality kicked in," Meister says. "I realized I was going to have to work for a living, and since that was the case, I had to have more control of the situation."

Meister worked for Whole Foods for several years, eventually being promoted to store manager at one of its Chicago locations. However, he began to feel the pull to return home to St. Louis, not only because of its cheaper cost of living but because of the growth the city had experienced while he was away. It excited him and his husband, Caleb, and they decided they wanted to be part of it.

"We would come back for visits over the years and see how much the city had changed — not just in the food and dining scene but in the neighborhoods that were developing," Meister explains. "It used to be just the Loop and the Central West End, but now it's Cherokee and South Grand and Benton Park and the Grove. Plus, there is a quality of life here because you can live well but within your means. You can enjoy more of the fun things in life because you don't have to work all the time."

Meister settled into the Bevo Mill neighborhood and got a managing job at Sur La Table. Eventually, he wanted to switch course, so he went to work in the kitchen at the Caramel Room under acclaimed chef Nick Miller. Under Miller's tutelage, Meister honed his professional cooking skills and further developed his passion for food.

He carried that with him when he left the Caramel Room for a job as a bartender at the former Element. Though he had little experience with the beverage side of the business before joining the Element team, Meister took what he learned about working with ingredients from Miller and combined it with his passion for customer service which he'd developed over the years working in retail and management. It felt like he was putting it all together.

Meister wasn't actively looking for a job when the Lemmons opportunity arose, but when it did, it was something he couldn't pass up. The reason was geography: The south city restaurant is located next door to his house, making it super convenient. However, the moment he went in for his interview, he realized that, even if it had been across town, this was the place he wanted to be.

"When I went in, I got really good vibes from the place," Meister says. "When I started working there, though, at first I wasn't so sure if I was doing a good job. I've come to find out that the Balkan community, and the Grbic family in particular, are very superstitious and hesitate to let you know that you are doing a good job or that they appreciate what you are doing. I think it's because they are afraid that if they tell you, you will leave. Once I found that out, I knew it was meant to be."

Meister feels that he has a unique opportunity as a bartender at Lemmons. For starters, he came into the restaurant when its bar program was still finding its voice, and he's been given full creative freedom to fashion it into whatever he wants it to be. This has meant educating customers on why a drink may cost a couple of dollars more than before, but he's found his guests to be receptive and understanding as to the reasons behind the changes.

More importantly, Meister feels that the restaurant's strong Bosnian inflection gives him the opportunity to go in a direction with the bar that is not typical in other St. Louis restaurants. Like Lemmons' chef and co-owner Senada Grbic, Meister takes its Balkan influence as a jumping off point for experimenting with different ingredients and flavors. Whether this means using figs to infuse vodka, or incorporating beets into a more savory cocktail, Meister finds inspiration at every turn — even if he still hasn't figured out how to make Grbic's famous Bosnian coffee.

"She's shown me how to make it her way, but I still don't do it right," Meister laughs. "She just calls me to have the water boiling and the coffee measured out, but she makes it when she gets there. If we could sit around and talk and have coffee all day, we'd do it, but we have a business to run."

Meister took a break from his bar and coffee dates to share his thoughts on the St. Louis food and beverage scene, the one cocktail trend that's piqued his interest and why there's so much to love about his beloved Bevo neighborhood.

What is one thing people don’t know about you that you wish they did?
I’m pretty much an open book; ask anyone that knows me ... especially after a couple of cocktails.

What daily ritual is non-negotiable for you?
Coffee and CNN. I’m a news junkie.

If you could have any superpower, what would it be?
The ability to travel the world without having to pay for anything.

What is the most positive trend in food, beer, wine or cocktails that you’ve noticed in St. Louis over the past year?
One trend that I know I’m following is savory ingredients in cocktails; widening the options for juices and mixers allows me to play with seasonality in crafting cocktails.

What is one thing missing or that you’d like to see in the local food and beverage scene?
Since starting at Lemmons, I immediately became family. I love the entire family and the community. There are great things happening in our neighborhood, and I’d love to see even more culture and diversity in such an open-minded area.

Who is your St. Louis food or drink crush?
Chef Nick Miller.

Who’s the one person to watch right now in the St. Louis food and beverage scene?
Meaghan Coltrain is back with Niche Food Group as the pastry chef at Sardella. Everything she makes is amazing.

Which ingredient is most representative of your personality?
Lemon balm. It grows like crazy in my garden, and I’m always finding new ways to incorporate it into recipes for food and drinks.

If someone asked you to describe the current state of St. Louis’ food and beverage climate, what would you say?
Definitely continuing our upswing, gaining national recognition and becoming known as a food town. When I left St. Louis for college in Chicago almost, ahem, twenty years ago, there were whole neighborhoods that didn't even exist, a handful of decent restaurants one local brewery. The entire scene has exploded. It’s all very exciting.

If you were not tending bar, what would you be doing?
Working alongside Chef Senada Grbic, of course!

What is your after work hangout?
My bar or my couch — I’m usually too tired to go anywhere else!

What’s your edible or quaffable guilty pleasure?
I’m a closet sweets eater. You’ll never see me eating chocolate or ice cream, but I do, and now everyone knows. Also, I love Mallort. The only other person I know that can stand it is my husband, Caleb.

What would be your last meal on earth — including drinks of course.
The only thing on my mind right now is our new Fall pasta coming out soon: House- made pappardelle with shredded beef ragu and house-made citrus ricotta with a bottle Dunja Rakija.