King & I Is Moving to Richmond Heights Next Spring 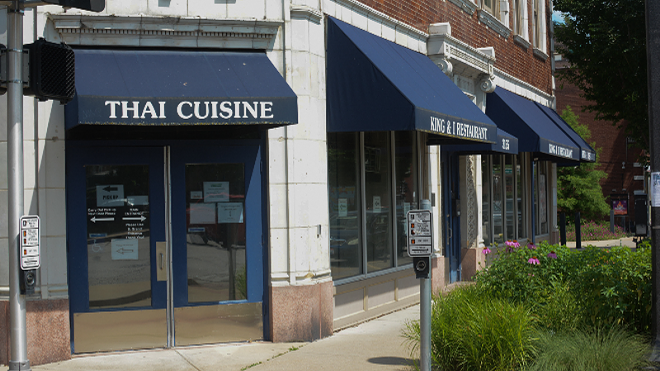 Andy Paulissen
The King & I is leaving its longtime home on South Grand Boulevard for Richmond Heights.

Major changes are underway for one of St. Louis' most beloved restaurants: King & I (3155 South Grand Avenue, 314-771-1777) is leaving its home on South Grand Boulevard and moving to Richmond Heights. The restaurant anticipates that it will open in its new storefront sometime in the Spring of 2023.

"There have been a couple of threads to me and my family's thinking," says Shayn Prapaisilp, who owns King & I with his family. "To be open as long as we have is just incredible, but there are two big things that influenced our decision. The first is the success of Chao Baan, which is close to King & I. Also, the pandemic has been a challenging time for restaurants, and we have been thinking through our business model to make sense for how people dine in 2022."

Prapaisilp's parents, Suchin and Sue, opened King & I at the intersection of South Grand Boulevard and Humphrey Street in 1983 — a time well before Thai cuisine had made its way into the mainstream of the U.S. dining scene. It became a runaway success, and the family eventually moved it to its current home a couple of blocks north where it has continued to set the standard for Thai dining in the area for the last three decades.

During that time, the Prapaisilps have opened other concepts, including Chao Baan and the international grocery stores United Provisions and Global Foods; they have also witnessed many changes in the way people eat. Palates have expanded as diners have become more willing to try new things and regional Thai cuisine — which they explore at their Grove restaurant, Chao Baan — has become increasingly popular in the area. However, one of the biggest changes they have seen over the last two years centers around the way people eat. Prior to the pandemic, the restaurant was filled with guests looking for a more formal, sit-down experience; now, people are clamoring for takeout and delivery.

"King & I used to be all servers wearing tuxedos," Prapaisilp says. "Back then, Thai food was a special occasion for folks, and now they come in two, three and four times a week, so we are obviously more casual. However, the current King & I manifestation is one of the 1990s with a big upstairs area; the restaurant is just large. We think we can still deliver the same great service and food, but with a smaller footprint." 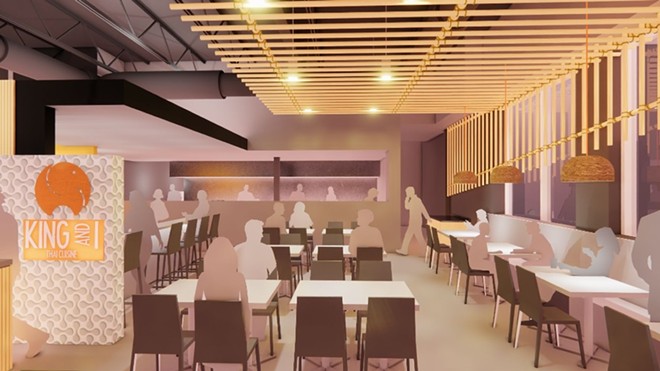 Courtesy of Revel Architects
A rendering of the new King & I dining room.

The new King & I will be located at 8039 Dale Avenue, in Richmond Heights in the former Blaze Pizza storefront. The Prapaisilp family is working with St. Louis architect Jay Reeves of Revel Architects to build out a 3,100 square foot restaurant that will feel refreshed and modern. Though carryout will be a focus, Prapaisilp emphasizes that the new King & I will still be a full-service establishment with the same food that guests have come to love and expect over its nearly 40 years in business.

Prapaisilp and his family are excited by the opportunities that the new restaurant will provide. Though they will be keeping the menu mostly the same, they are eager to add different dishes and play around with items that they hope will become new favorites.

"This brand new kitchen spaces gives us the opportunity to introduce a few new things that we hope will become flagship dishes," Prapaisilp says. "People are now more interested than they used to be in trying new dishes, so we are excited to be able to refresh ourselves."

Though Prapaisilp cannot promise an exact opening date, he and his family are aiming to welcome guests into their new location sometime this coming spring. In the meantime, the current King & I will remain open, though its hours have changed. The restaurant is now open Tuesday through Thursday from 4:40 until 8 p.m., Friday and Saturday from 11 a.m. until 2:30 p.m. and from 4:30 until 9 p.m. and on Sundays from noon until 3 p.m. and 4:30 until 8 p.m.

"South Grand is a part of my family's history; I live in the neighborhood and my extended family still owns businesses, like Jay International [Food Co.] in the neighborhood," Prapaisilp says. "We've been happy to be a part of that history. Now with the old guard retiring, it gives opportunity for new people to come in and put their mark on it. It's always been an iconic street, and I think there are good things to come."