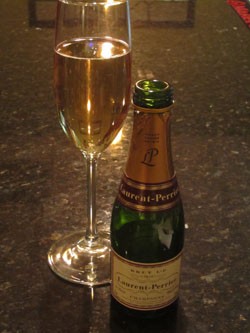 There it is, right there on the cocktail list in front of us. Rye Manhattan. We want one of those, on the rocks. Truth be told, that's what we feel like drinking most of the time. It's our drink. But we covered that ground already (Drink of the Week #6, Off Broadway) and we have a column due in two days, so tough noogies. Pick something else, buddy. There's a Sazerac, but we've done that, too (Drink of the Week # 33, Herbies' Vintage 72). None of the other cocktails are speaking to us. We're having fish for dinner, so no red wine. White wine seems too summery. Voila, champagne.

We arrived at this restaurant in a similar fashion. The last stop on our to-do list left us in downtown Clayton at 6:30 p.m. We searched our phone for nearby restaurants, then eliminated the ones that are closed on Sunday nights. Hello, Pomme Café and Wine Bar!

We sip Laurent-Perrier Brut and look out the window at the dusky sidewalk and its sparse foot traffic. Inside a row of globe-shaped pendant lights are turned low, each like its own setting sun. We imagine this chic café is all hustle and bustle on weekdays, but tonight it is serene.

We are absorbing this place, watching, waiting. We have found that if we are aware and patient, then we will be rewarded with a small gift; a snippet of overheard conversation, a detail, something to grab onto and spin into a story. We study our glass of bubbly and listen intently to the murmurs in this French bistro. When we finally hear that little whisper, this is what it says: "Au revoir."

That's when we know there will be no more Drinks of the Week for us. From here on out there will be just drinks. The revelation comes with a swiftness and clarity rarely granted us. When it comes to decision-making, this apple falls pretty close to the mom tree. Mom likes to lay out all the options in front of her. She contemplates each one, weighs them against one another, turns them over in her mind, mulls, debates, hems and haws. Dad, on the other hand, is a man of bold action, unencumbered by so much slow consideration. "Ready, fire, aim," as he likes to say.

If there's one thing we have learned from Drink of the Week, it's that a plan can get in your way. Sure, planning has its place, in architecture firms and meth labs, for instance, but we have sometimes used it to hedge against the unpredictability of the universe. We consult our horoscope and check the weather, as if we can somehow know the unknowable.

We have, now and again, had a perfect plan go off without a hitch. We have had our finger on the pulse, have written about a hot new restaurant (Drink # 46, Salt), a groundbreaking mixologist (Drink # 28, Taste) or a world-class barista (Drink # 49, Half & Half). But the most memorable moments always caught us by surprise. The unexpected connection with a stranger (Drink # 23, The Silver Ballroom), the secrets revealed to us (Drink # 19, Aya Sofia) -- these things happened quite by accident, at the intersection of circumstance, necessity and desire.

The last time we featured champagne (Drink #1, Moet and Chandon White Star), we were toasting the start of a new gig. Tonight we raise a glass to two years of drinking on someone else's dime, to all the people who kept us company along the way, to whatever comes next. Of course, since we happen to be on our own this evening, we don't actually raise our glass. We don't toast aloud, just kind of think it in our head. It's pretty anti-climactic, actually. Then, as we're leaving, just as we step out onto the sidewalk, cheers erupt. A crowd has broken into wild applause! As it turns out, game six of the National League Pennant series is on in the bar next door, and the Cards have just scored.