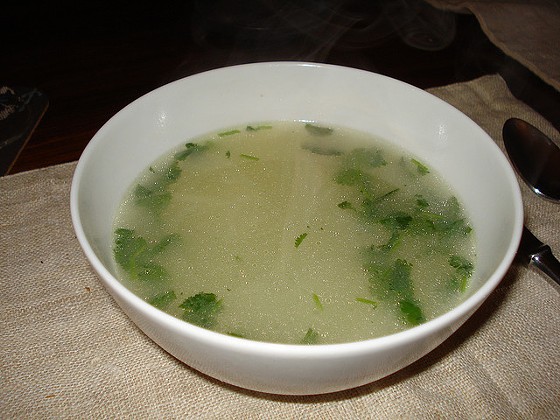 Broth is the new superfood. | Peter Smith via Flickr

Step into a professional, from-scratch kitchen, and you're likely to encounter a large, bone- and water-filled pot slowly bubbling like a witch's cauldron. The product of this enterprise -- broth -- will go on to become a number of things: a hearty soup, a rich sauce or the base for any number of dishes. However, recent talk of its nutrient-rich properties has turned this once-humble liquid into a bona fide food trend.

"I think it relates back to things getting done from scratch," says Simon Lusky, owner of Athlete Eats (2837 Cherokee Street; 314-932-5566) and the nutritionist for the St. Louis Cardinals. "It also has a lot to do with the push to use local products. They are much better, but you pay a premium for them. Making broth is a way to make sure you get value from what you purchase."

Whole-animal utilization is one of the reasons that Chris Bolyard of Bolyard's Meat & Provisions (2810 Sutton Boulevard, Maplewood; 314-647-2567) decided to offer several broths at his Maplewood butcher shop, but it's much more than that. "I first learned of the healing properties of broth after doing a race," the avid runner and triathlete recalls. "When I finished, I was malnourished and dehydrated. Instead of giving me a Gatorade or a Powerade, I was given a cup of warm chicken broth."

Indeed, the reason for broth's growing popularity comes from its reputation as the "it" nutrition drink, as well as its natural fit with the trendy Paleo diet. Instead of coffee or tea, adherents slurp cups of broth as if drinking a savory tea, absorbing all of the vitamins and minerals from the rich, flavorful liquid.

"Bone broths are high in amino acids and antioxidants," Bolyard explains. "We make ours simply with bones, water, herbs and spices, so it's much better than the stuff people think of from out of a box." Bolyard's shop sells three different kinds of broth -- beef, pork and chicken -- and can even add additional items such as miso, known for its probiotic properties, or calcium- and iron-rich kombu.

Lusky is equally quick to tout broth's health properties. "Nutritionally, it's great -- this time of year especially, because broth is so warm and nourishing. Considering its antioxidant properties, broth is like drinking an antioxident tea." However, broth is not just a cold-weather beverage. In fact, it's quite popular with the boys of summer.

"Athletically speaking, broth is beneficial," Lusky notes. "In fact, by luck, it's been a part of baseball for some time. In the clubhouse, there are always soups and sandwiches around because they are easy, but it turns out that broth is the perfect gameday food. It's easy on the stomach and [can be] high in sodium, so it replenishes the system the way that a sports drink does. But because it's savory, broth satisfies both thirst and appetite."

Bolyard, who was recently featured in the Wall Street Journal for his broths, says that they've been popular on the East Coast for some time now and are starting to make their way to the Midwest.