Local Dentist Wants to Steal All Your Candy, Ban Fun (For a Good Cause)! 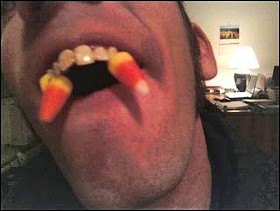 image via
Don't be fooled: He's a candy vampire!
Hey, kids! St. Louis dentist Dr. James Maxwell is secretly a goblin who wants to steal all your hard-won trick-or-treating loot.
It gets worse than that: He's enlisting the help of your parents to snatch the Reese's Peanut Butter Cups, fun-size Snickers and those tiny tastes of the rainbow, individual-size bags of Skittles, from your cold, grease-painted hands. Gut Check is all for surrendering the toothbrushes and dental floss that some jerks think it's cool to hand out to little mummies and Harry Potters on Halloween, but keep your latex-gloved hands off our sugar supply!
Maxwell, who operates out of the offices of Crestwood Dental Group on Watson Road, announced last week that the week following Halloween, he'll exchange a dollar for every pound of candy kids drop off. (Their doting parents will get a coupon for $100 off tooth whitening.)
"Kids can have all the fun of trick-or-treating, plus a piggy-bank bonus," Maxwell trumpets in a press release.
Gut Check got on the horn with Maxwell, who says that while there isn't necessarily a spike in cavities post-Halloween, "the cavities definitely aren't going away."
So this is his way of trying to curb candy consumption on this most conspicuous of candy-consuming holidays.
What a terrible ploy, snatching candy away from kids for less than shelf price. Not that Gut Check did the math to see if we could make a quick buck or two by cleaning out the shelves at Walgreen's and turning around and selling it back to Maxwell before we had a chance to eat it. We'd never do that.) He probably wants all the candy for himself! He probably wants to--
--send all the candy to U.S. troops serving overseas so they can have Halloween too.
Awwww.
"I've heard of programs like this before, and my hygienist was thinking about some of our patients currently in the military," Maxwell tells Gut Check, adding that some candy is earmarked for military patients overseas to share with those around them, and some to the USO to distribute to other troops.
OK, fine, good cause, blah, blah, blah. The candy bandit's all jazzed about taking other kids' bounty, but would he do it to his own doe-eyed children?
Dr. Maxwell, we blithely inquire, do you have kids?
"I have three-year-old and five-year-old girls and another baby girl on the way," he says. "They're definitely happy to give up their candy for a good cause. My five-year-old says she's going to be a witch, and my three-year-old is -- what did you say you were going to be? -- she's going to be a princess fairy, she says."
Again: Awwwww. OK, we give up.