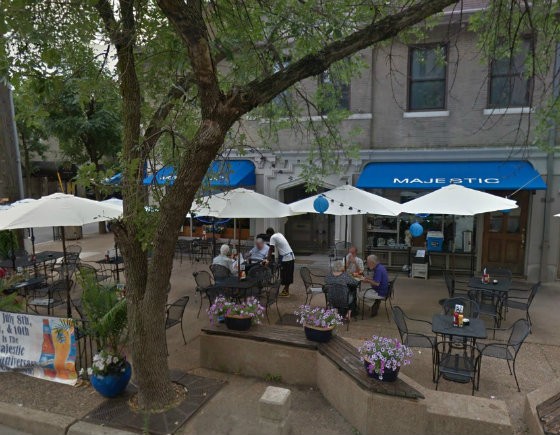 After more than 50 years in business, the Majestic Restaurant (4900 Laclede Avenue; 314-361-2011) in the Central West End will close next week. Second generation owner Pete Politis is selling the business.

Update 11:30 a.m.: Ian Froeb of the Post-Dispatch writes that he spoke to Politis this morning, who said the situation is "up in the air." We'll update as things become more clear.

Update 3:45 p.m.: We received an e-mail from owner Pete Politis. See his comment below.

After several phone calls, we were unable to speak to Politis, but someone who answered the phone at Majestic confirmed that the business was sold and is closing next week. Majestic was founded by Politis' father, Lou, who emigrated to the U.S. from Greece when he was fourteen years old. Lou and his wife started the restaurant as a small diner in 1961, way before the Central West End was a hotspot.

Majestic expanded into the adjoining space in 1980 and also opened its famous patio. We named it the Best Bottomless Cup of Coffee in 2001, and we're sorry to see such an institution close up shop. We'll be following this story as it develops.

Politis made this statement via e-mail:

We are in the process of selling and nothing is official, including dates. The information passed between your company and the post has been incorrect.

I will inform you when there is a set date and with correct information. Comments by phone will not be made, until I personally contact you first.

The headline of this post has been updated to reflect new information.