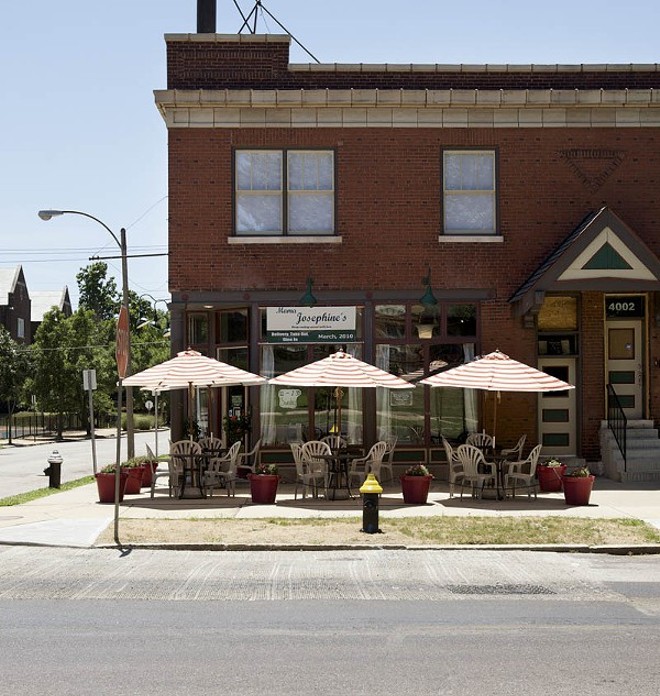 Jennifer Silverberg
Shaw diners have had their last taste of Mama Josephine's.
The not-quite two-month-old partnership between Mama Josephine's (4000 Shaw Boulevard; 314-771-4001) and Five ACES BBQ has turned into an acquisition.

Mama Josephine's owner Mary Samuelson confirms that she will be turning over operations of her beloved Southern-food restaurant to Antonio and Toshia Ellis of Five Aces BBQ effective today, April 19. The new eatery will be called Five Aces BBQ and Southern Home Cooking.

"Last night, I took down my mom's picture from the restaurant," Samuelson says of the portrait of the restaurant's namesake. "I cried my eyes out. I've been crying all week. This is probably the hardest thing I have ever done. It's very personal to me."

There is no dispute at the heart of the decision.

Samuelson, who works a full-time job as a data scientist in addition to her responsibilities at Mama Josephine's, had been weighing the idea of selling the business for some time, going so far as to post a Craigslist ad for that purpose. Not long after posting it, she was approached by the Ellises, who suggested a partnership rather than an outright sale. The idea seemed like a win-win for both parties: Samuelson could maintain her connection to the restaurant she opened to honor her mother, and the Ellises could get the brick and mortar location they needed for the burgeoning barbecue business.  However, not two month later, Samuelson says she realized she had to step away from the arrangement.  "We talked about being partners, and that really was the plan, but it just got to be too much," explains Samuelson. "One day, Antonio just turned to me and said, 'Why don't I just buy you out?' As much as I hate to do it, I just had to."

Though Samuelson and the Ellises insist that they will still offer many of Mama Josephine's specialties — chicken and dumplings, meatloaf, fried chicken — Saumelson will no longer be doing any of the cooking.

"All of the favorites will still be there," Samuelson says. "The chicken and dumplings, fried chicken, fish, meatloaf, chicken fried steak — Antonio has a passion for cooking so that's what makes this OK."

In separate statements released on Facebook and the neighborhood app Next Door, respectively, both Samuelson and the Ellises insist that the new arrangement is more a name change than an outright rebranding, with the Ellises noting that Samuelson "has worked with us to ensure her recipes would remain the same." Still, it's hard to imagine that Mama Josephine's will be the same without Samuelson, much less its very name.

But Samuelson insists the changes will benefit Five Aces BBQ, citing her inability to give more to the restaurant as a hinderance to the Ellises' aspirations. "Antonio has great ideas, but my goal was never to be in this business to make money and be a huge restaurant," says Samuelson. "I didn't want to be open seven days a week, ten hours a day. He does. And really, the neighborhood deserves a kind of place that can be open more."

As for her post-Mama Josephine's plans, Samuelson wants to visit her out of town family and enjoy spending time with her husband, who she admits hasn't seen much of her in the last six years. She is also writing a Mama Josephine's cookbook, featuring all of her mother's recipes as well as the stories behind them. All profits from the sales of her book will be donated to the Shaw Community Center in her mom's name.

As evidence of the Ellises' commitment to honoring her mother's legacy, Samuelson says that they came up with an idea for replacing the portrait of the restaurant's former matriarch. "They are going to have a silhouette of my mom's portrait on the wall," Samuelson says. "She will still be there in spirit."

Full statements from both Mama Josephine's and Five Aces BBQ are below.

Here is the statement that Samuelson posted to Mama Josephine's Facebook page:


It is with great sadness that I announce that things will be changing at Mama Josephine's after this weekend. Antonio Ellis, owner of Five Aces Bar-B-Que will be assuming responsibility for the restaurant beginning Monday, and while I will still be around at times, I will no longer be part of the daily restaurant family (although I will still cook breakfast sometimes and help out on his food truck. I can't just quit cooking all together! LOL)

The restaurant name will be changed to Five Aces Bar-B-Que and Southern Home Cooking, and in addition to my mom's favorite recipes, like chicken and dumplings, chicken fried steak, meatloaf, fried catfish, shrimp n grits, etc., he will be serving his excellent hickory smoked bbq. I hope that each of you will continue to visit, enjoying my mom's food and also Antonio's amazing ribs, rib tips, pork steak, burgers, links, and other smoky deliciousness. I have enjoyed meeting and visiting with each of you over the past six plus years and have made some wonderful friends. I will carry each of you in my heart, cherishing the memories of your visits and the conversations we've shared. I will still be involved in the neighborhood, of course, and will see many of you there. I would like to say a special thank you to my neighbors in Shaw, who have been so supportive and caring, and encourage you to stop by this Saturday for once last free piece of JoAnna's strawberry cake, my mom's favorite dessert, that we have served on my mom's birthday and our anniversary date since we opened in 2010. May your lives be filled with even more love than I have put into preparing my mom's recipes, and that's a LOT! Best Wishes, Mary

And here is the statement from Five Aces BBQ:

Mary at Mama Josephine's has decided to turn the reins of her restaurant over to Antonio of Five Aces Bar-B-Que. We at Five Ace's are very grateful for the opportunity to pick up where Mary left off with serving the Shaw Neighborhood. Everyone knows Mary is a Southern Spitfire that holds no punches. She has worked with us to ensure her recipes would remain the same. We will continue to offer Mama Josephine's Homestyle favorites as a perfect pairing with Antonio's unique style of barbecue.

We want to honor Mary for serving the community by making April 16th an annual Mama Josephine's day at Five Aces Bar-B-Que. Come by to wish Mary well tomorrow April 16th during our operating hours (9am-8pm). She genuinely loves the Shaw community so please stop by to show your appreciation. You will notice a name change on the building in the near future but the food will remain delicious. We appreciate the Shaw neighbors for welcoming us into the community. This location will now be named "Five Aces Bar-B-Que Homestyle Southern Cooking at Shaw".