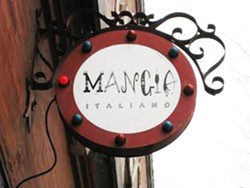 Just spoke with James Bonsanti, one of the new owners of Mangia Italiano (3145 South Grand Boulevard; 314-664-8585). He confirms that the south city mainstay, which closed for renovations at the beginning of the new year, should reopen next week.

Bonsanti characterizes the renovations as a "fresh paint job." There is also some new artwork.

"The menu is staying the same," he says. "There's a bigger selection of liquors and more local brews on tap."

Chef David Timney, who took the reins of Mangia's kitchen in late 2009 (read our Chef's Choice profile of Timney), will remain with the restaurant for three months to help its transition to its new owners. When Timney leaves, Bonsanti himself will helm Mangia.