Have a drink suggestion? E-mail us!

Dogs drink water, and pretty much anything else their masters pour into their bowl. They like beer a lot. Cats drink water -- and milk, even though it's bad for them. Birds drink water exclusively, often the same water they bathe in. Except hummingbirds, which drink nectar -- because they can. Fish drink water -- or do they? Monkeys drink banana milkshakes. Elephants drink water. Inchworms drink water, or at least the water that's in the leaves they chomp. Dracula drinks blood. So does Gene Simmons, though he probably drinks urine, too, because he sucks. Frankenstein doesn't drink anything. Robots drink nothing, too. Monster cars drink gasoline, and blood. Chemists drink H2O. Mexicans drink agua. Football players drink Gatorade. Winnie the Pooh drinks honey, which isn't a liquid, but don't tell him that. Castaways drink salt water, which blisters their lips and causes them to hallucinate, which sucks for them. Baseball players drink tobacco juice, and liquid steroids. Frenchmen drink wine; Italians, grappa. The Japanese drink sake; the Russians, vodka. Recovering alcoholics glug iced tea by the gallon. St. Louisans drink Busch almost exclusively when they're not drinking their mama's bath water.

Like hummingbirds, Monarch butterflies drink nectar. Lucky them. New Yorkers drink manhattans, which are a kind of nectar. Maplewoodians drink manhattans as well, and they like to do so at Monarch. It's a swank fledgling restaurant in the heart of downtown Maplewood. And if you have a couple Benjamins burning a hole in your pocket, you should make a beeline. The restaurant kicks butt. In addition to many fine wines and other liquids, Monarch offers, joy of joys, lobster macaroni and cheese. Lobsters have no choice, we assume, but to drink salt water, which is why lobsters are always hallucinating. Macaroni and cheese can't drink any liquids, because it's a food, not a creature, and therefore doesn't have a mouth or a tummy, dummy, and therefore, we assume, it never gets thirsty. But that's a question for philosophers, not columnists.

It may come as a surprise to regular Drink of the Week readers that in the 72 years we've been writing this column, we've never once featured the glorious, sturdy manhattan, a workhorse of a drink that consists of three ace liquids and one solid: whiskey, vermouth, bitters and a cherry. The classic manhattan is an acquired taste, we'll give you that, because even if you like whiskey -- which you should, because in small amounts it's good for you -- the coupling of it with bitters and vermouth changes the flavor qualities of the whiskey, dries it and makes it kind of funky.

A manhattan is to a martini as a coconut is to a nut: It's not one. At Monarch, bartender Mark Whitener makes a topnotch manhattan, and he uses Woodford Reserve bourbon, which is the official bourbon of the Kentucky Derby, for what it's worth. Racehorses drink water. He pours the three liquids into a shaker with ice, shakes, and pours the blend into a cocktail glass, at the bottom of which he has already dropped the maraschino cherry. Then he's finished, and he serves up the drink, which is the color of a brand-new penny. And then you, the recipient of the manhattan, take a drink of this nectar, this liquid, this gasoline, this sweet, sweet juice. 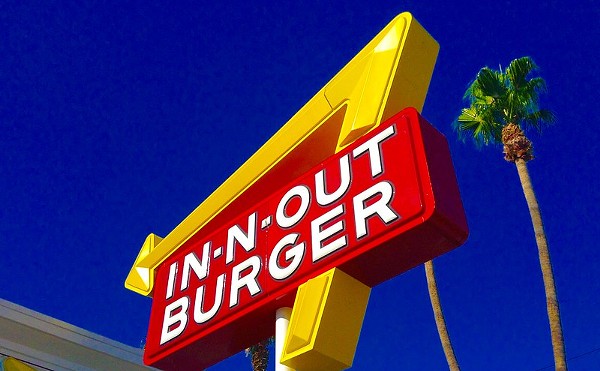