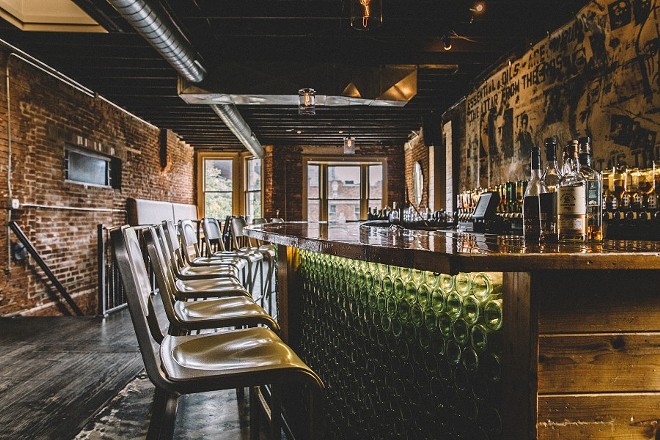 Courtesy of Maryland House
Maryland House will open in the former Mandarin Lounge space this fall.
The Central West End will soon have a new lounge and events space courtesy of a beloved neighborhood brand. Maryland House (44 Maryland Plaza), by the team behind Brennan's, will open this fall on Maryland Plaza in the former Mandarin Lounge. It's a new venue that should look a little familiar to veteran Central West End bar-goers who patronized the original Brennan's location from 2005-2020.

"Maryland House was a big part of the old space," explains owner Kevin Brennan. "We knew we wanted to bring it with us when we moved, so this has actually been a three-year conversation. At the old Brennan's, [Maryland House] was where we hosted a lot of birthday parties and get-togethers, so we've been battling that since we relocated. We get about four or five calls a day about private events, and we just can't accommodate it. We're hoping this will allow us to do that and think of this as an extension of our existing business rather than a new one."

Originally conceived of as a wine shop and cigar bar when it first opened in 2003, Brennan's quickly morphed into a  beloved bar and restaurant that became the go-to watering hole of the Central West End. Maryland House, which was located upstairs, was an integral part of that. However, when Brennan's was forced to move around the corner to Euclid Avenue because of the Saint Louis Chess Club expansion, there was no room to accommodate the distinct space. Brennan lamented this situation; though he wanted to be able to host special events and gatherings, he simply could not make peace with what he'd have to charge to rent out the consistently packed Brennan's.

Courtesy of Maryland House
An illustration of the Maryland House's rooftop bar.
The new venue will allow him and his team to expand their offerings to larger groups while also serving as an additional place to drop in and have a drink in the cosmopolitan neighborhood.

"I think the West End is looking for something like this," Brennan says. "It's a little sleepy right now, and I think the neighborhood wants things to come back."

Brennan envisions the new Maryland House to be aesthetically consistent with his flagship bar. He describes the vibe as that of an upscale, funky lounge that will have a loft-like feel to it thanks to its location on the building's third floor. He's especially excited about the rooftop deck and plans to put in an outdoor bar so that guests can enjoy the beautiful skyline.

Brennan describes the Maryland House menu as being comprised of elevated small plates with beautiful presentation. He notes that the venue will be the sort of place where guests can pop in for cocktails and snacks or stay to enjoy a full meal from a selection of small plates. The menu will change seasonally but will contain a few staples that he hopes will become go-to dishes for regular guests.

As for the beverage offerings, Brennan hopes to build upon his cocktail program. He also plans to have a small-to-medium selection of beer and a good wine list and hopes that this, together with delicious food and a lovely atmosphere, will add a vibrant energy to the Central West End's nightlife scene.

"We're adding something original, but familiar, that we think people will like," Brennan says. "We need some positive things going on when things have been upside-down."