Matt Dawson of Brandt's Cafe in the Delmar Loop

This is part one of Deborah Hyland's Chef's Choice profile of chef Matt Dawson of Brandt's Cafe in the Delmar Loop. Part two, a Q&A with Dawson, is here. Part three, a recipe from Dawson, is published here.

In one of his first acts as chef at Brandt's Cafe, Matt Dawson disconnected the phone. He needed to minimize the distraction of sales calls so he could focus on retooling a St. Louis institution. Dawson had a hand in everything from scouring and reorganizing the kitchen to painting the walls and putting the dining room back together. The back-lit cityscape motif remains, but the rich wall color and sleek bar give the restaurant an updated feel.

As Dawson crafted the new menu, he likewise worked to keep a balance of old and new. He decided to keep the crab cakes and spinach dip but give them new twists. For example, he's added finely minced vegetables and garlic to the crab cakes as well as dollops of Cajun remoulade and fennel oil. "I love fine dining, but I want it to be more funky than that," he says.

He won't get too crazy, though. Years ago, while working at Peppertini's (r.i.p.) in Creve Coeur, Dawson crafted an appetizer of purple asparagus wrapped with veal scaloppini, grilled and served on a plate with heirloom tomatoes and a parsnip purée. "I didn't think about it," he says, until he noticed diners taking photos with their cell phones. "It was a great phallus," he admits. "I still got a lot of pictures taken, though." 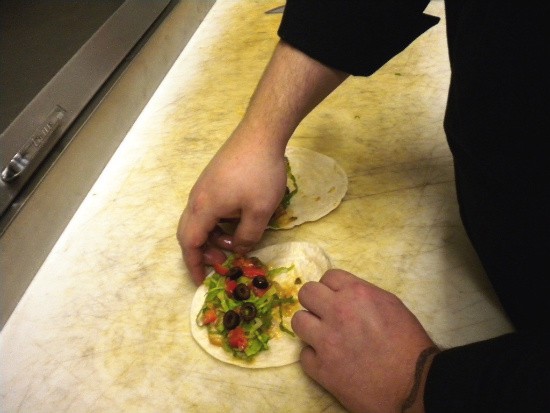 Born and reared in the St. Louis area, Dawson now lives in St. John. ("I went to St. Charles West," he offers before Gut Check has a chance to ask.) So he's well acquainted with the local palate

Still, Dawson expresses some frustration at diners who refuse to venture out of their comfort zone, like the students in a cooking class who recoiled at pork cooked to medium rather than the old-style Styrofoam-dry. "I don't want to be a Gordon Ramsay," he's quick to add. "This is St. Louis. The entire town is built on relationships. All the chefs know one another. All the vendors know one another."

Dawson began his cooking career as a teen at a local Boston Market and eventually spent several years working in corporate restaurants. By age 25, however, he felt stuck. He couldn't move up to sous- or executive-chef positions without a degree. After graduating from L'Ecole Culinaire, though, opportunities began to open up.

For now Dawson is working twelve-hour days (and then some) at Brandt's while his wife stays home with their three children, ages three, five and eight. Somehow he squeaked out time to write a book, Silver Eclipse, a fantasy novel set in Missouri, this past November. While the novel, and his other downtime hobbies of painting, harmonica and Dagorhir (a form of live-action roleplaying), seem to have little to do with cooking, they're all a part of Matt Dawson's ethos.

"I love being a mad scientist," he says.