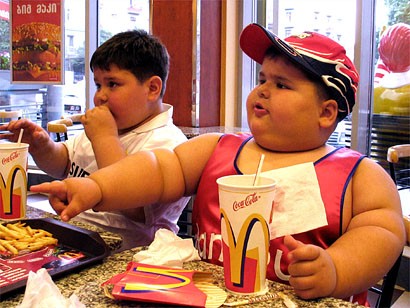 McDonald's franchise owners might want to review how to deal with employees.

In Sao Paulo, Brazil, a court has ordered a McDonald's owner to pay $17,500 to a former manager as compensation for making him fat. The Associated Press reports that the manager worked for the store for 12 years and gained 65 pounds, which he attributed to being forced to sample food for quality control, and for the free meals provided to employees.

A McDonald's owner in Canton, Ohio, might find himself in court after including political messages with paychecks.

The Associated Press reports that owner Paul Siegfried's notes read, "If the right people are elected we will be able to continue with raises and benefits at or above our present levels. If others are elected we will not." He then recommended votes for Republicans John Kasich for governor, Rob Portman for U.S. Senate and Jim Renacci for Ohio's 16th congressional district and included fliers from Renacci's campaign.

Ohio's secretary of state has launched an investigation of Siegfried for possibly violating Ohio's voting laws. McDonald's corporate and regional offices have condemned Siegfried's actions as being against company policy.

Siegfried issued a statement on Friday: "Distributing this communication was an error of judgment on my part. Please know, it was never my intention to offend anyone. For those that I have offended, I sincerely apologize."