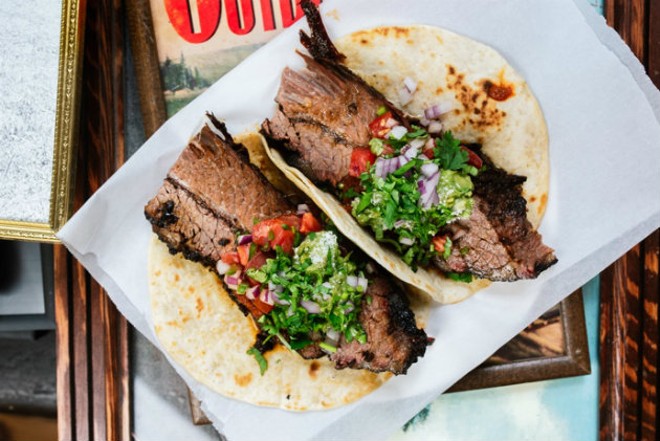 One of the most-anticipated restaurants of the year is about to make its debut: Original J's Tex-Mex & Barbecue (7359 Forsyth Boulevard, University City) opens for business at 11 a.m. today.

Owners Mike and Liz Randolph posted the news on the restaurant's official Facebook and Instagram pages last night, sharing that doors will open from 11 a.m. to 3 p.m. this week. The hours are abbreviated for now, according to the post; we'll update this story when regular operating hours are announced.

As the Riverfront Times reported earlier this year, Original J's is focused on serving Tex-Mex-style barbecue restaurant in a "casual, family-friendly" atmosphere. Expect the counter-service restaurant to offer "Texas-style barbecue served as tacos, platters and bowls" and draw some inspiration from the couple's former lauded restaurant, Público.

The concept for Original J's was also influenced by the Randolphs' travels through Texas, which has translated into menu items such as pulled pork nachos, brisket chimichangas and chicharrons with barbecue rub.

"I don't think that this is just another barbecue restaurant in St. Louis, but I also don't think a city that loves its barbecue like St. Louis has reached critical mass," Randolph told RFT in August. "Look at places like Kansas City or Memphis or Nashville — there's nothing wrong with having a lot of barbecue in your town."

In reverence to the Texas-style barbecue that inspired Original J's, Randolph is taking the low and slow approach to smoking meat, letting it go for sixteen hours over Missouri oak in Myron Mixon smokers with just a simple salt and pepper seasoning.

"The most important thing for us is to have reverence and respect for Texas barbecue," Randolph explained. "We're not setting out to say we have the best Texas barbecue. The thing that is instilled in us is that we are dedicating ourselves to the ideal."

While Público has inspired part of the Original J's concept, the vibe and price point at the barbecue joint will be more casual and approachable — and despite the restaurant' name, the Randolphs say to expect more than just platters of smoked meat.

"This is what Liz and I want to eat and what we are excited about at this point in our lives," Randolph said. "Liz isn't a huge fan of having a big platter of smoked meat, and she had a huge role in developing the half of the menu that we hope will appeal to a broader range of people."