A wine's value is based upon it. Cheese is affected by it — butter too. Even lamb possesses it. For beer, however, it has remained elusive.

That X factor, terroir, can be thought of as the presence of growing environs in a finished product. It's usually discussed in terms of wine but can be applied to any product in which the land, climate and character of a place plays a noticeable factor in its composition.

Aaron Kleidon, co-founder of Scratch Brewing Company (264 Thompson Road, Ava, Illinois; 618-426-1415), could not help but notice how the concept of terroir was missing in beer — and American culture as a whole. After college, the southern Illinois native was living in Colorado where he worked at an airport. The job afforded him the ability to fly standby with regularity, and he took every opportunity to explore different locales. His travels made him aware that the U.S. was missing the sort of regional food and drink found throughout Europe. The observation would lead him back home to Ava, Illinois, determined to change that and create a product that was distinctly of its place.

"It was a way I could move home," Kleidon explains. "I grew up here, and I like it in southern Illinois better than anywhere I have ever traveled."

For Kleidon, beer was a natural focus for his ambition. He'd taken up home brewing in Colorado, and he had an additional skill set that would allow him to express the land in his beers: foraging. Growing up on the outskirts of the Shawnee National Forest, Kleidon spent a good part of his childhood in the woods, gathering plants and hunting for mushrooms with his parents and grandparents. He developed an expertise in edible plants, and eventually, began incorporating those ingredients in his beer. 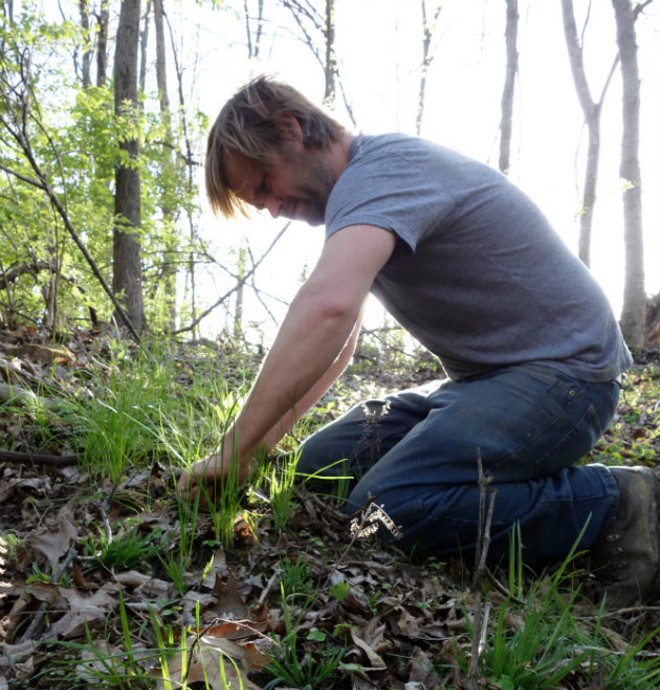 Kleidon was not the only person in the area interested in brewing unique beers. Marika Josephson, who would become Scratch's co-founder and head brewer, was also an avid home brewer with a love for the land. At a local home-brewing event, she met Kleidon, and immediately realized he was a kindred spirit. As the pair got to know each other, they would share their thoughts on opening a brewery. One day, they decided to each write down their ideas for their dream brewery. When they compared notes, their visions were nearly identical.

Out of that shared vision, Scratch Brewing Company was born, a three-acre farm and brewery with facilities — including a tasting room, grain smoker and wood oven — built by Kleidon and his father. Scratch is surrounded by the 75-acre property owned by Kleidon's parents as well as additional acreage that belongs to family friends, giving him ample space to forage for ingredients. As Kleidon explains, the brewery just feels like it belongs in the environment. It immerses guests in all that goes into the beer.

Since opening in 2013, Scratch has attracted a clientele willing to travel to experience its unique beers and facilities. It's not just St. Louisans making a two-hour trek. People have come from all over the country — and even the world — to visit Scratch, prompted in part by the book Josephson, Kleidon and their then-partner Ryan Tockstein co-authored: The Homebrewer's Almanac. The book serves as a guide for anyone looking to learn how to make beer from ingredients in the local environment.

The brewery has also caught beer drinkers' attention because of the national accolades it has received — including being recognized as one of the nation's most interesting breweries by All About Beer magazine and even "America's Coolest Microbrewery" by Men's Journal.

"Scratch is the great American microbrewery, built by hand and rooted in Midwestern soil," writes Jed Portman for Men's Journal. "The rest of the world is beginning to catch on, but you can still find a moment of serenity — and a few bottles to take home — if you are willing to make the trip."

Many have been willing to do just that as the brewery has risen to prominence in the craft beer community. Yet no matter how big the buzz, Scratch remains — and plans to remain — a small operation.

Its very nature dictates that. As a brewery devoted to foraged beer, Josephson and Kleidon are bound by the land. If chanterelle mushrooms do not come up, they will not use them in their beer. The same goes for cherries and every other fruit in their popular beers. They refuse to buy these ingredients, which makes mass production virtually impossible. As Kleidon explains, they brew with an eye not toward replication but toward research.

"There's no shortage of ideas when we brew beer," says Kleidon. "We brew beer as an experiment and always try to make a beer that will benefit us further down the road. We have the potential with every beer to learn a lot."

But they're not just dabbling. Josephson and Kleidon brew year-round and make preparations for winter, including drying herbs and preserving what ingredients they can in the fall. Additionally, they use a lot of bark and trees in their beers, which are available during wintertime.

In addition to beer, Scratch has a baking component. The brewery produces naturally fermented sourdough, some of which is sold at a nearby weekly farmers market. They keep the rest to use at the tasting room's small menu. They make their own pizza crust, grow all of the ingredients found on their pizzas and use the same sourdough leaven to make the beer.

Josephson and Kleidon hope that the "maker culture" they live out at Scratch will have an impact on the broader community. As Kleidon notes, the area around the brewery was a hub for coal mining in the 1980s. As that industry died, the community has struggled to find an alternative. The pair hope that what they are doing at Scratch will inspire other businesses to locate in the area.

"We can grow absolutely everything here in the Midwest, and there are a whole lot of opportunities for making stuff that is different," Kleidon says. "If we can encourage other business to open up or things to start up, then that is pretty important to us as well."

For their part, the partners are content with what they have, focused on remaining a 300-barrel a year brewery that exists as a way to take care of both the land and those who work it. If they have to grow in order to provide health insurance for their employees or to make their lives more comfortable, they will do so. However, their main focus is to take care of their people, create a community, serve as an incubator for ideas — and produce a beer that is a reflection of their little slice of the world.

"I think our beer is different than anywhere else," says Kleidon. "We are really trying to make a beer that you can only make here in southern Illinois. We're not 100 percent there yet, but it is a long-term goal, and we are working toward that."

Scratch's tasting room is open Thursday through Sunday. It's cash only and cannot accommodate large parties without prior arrangements. For additional information, including what's currently on tap, visit www.scratchbeer.com.