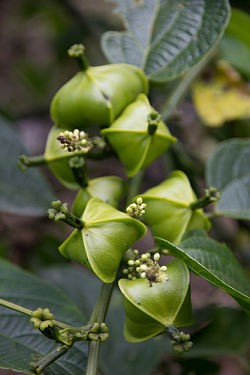 Omega-3 fatty acids, for some of us, are a mixed blessing. On one hand, they have insanely good health benefits: they reduce the risk of heart disease, they ease inflammation from arthritis and asthma and they may even help with depression, ADHD and Alzheimer's. On the other hand, for the longest time, the only way to get them has been from eating fish -- in particular, oily, fishy-tasting fish.

Recently, though, researchers from the Missouri Botanical Garden discovered that the seeds of Plukenetia huayllabambana, a plant that grows in northern Peru where it's known more familiarly as "Sacha Inchi" or "forest peanut" are also a reliable source of not just omega-3's, but their cousins omega-6 and omega-9.

And it tastes good! Well, at least according to Rainer Bussmann, who, along with his colleagues Ashley Glenn and Caroline Tellez, discovered the secret of Sacha Inchi during a series of lab experiments meant to uncover its nutritional properties.

"You can do two things," he explains. "You can roast it, and then it tastes very nutty, better than peanuts. It's an ideal snack; it helps to get the cholesterol down. Or you can make an oil and it tastes very nice, good for salads. It's an excellent alternative for people who don't want to eat fish. You don't want to watch the Super Bowl with fish oil pills."

Sacha inchi contains 65 percent omega-3. "That's the highest level in any plant known," says Bussmann. "It also has another 25 percent omega-6 and 9 percent omega-9 and quite a bit of vitamin E and vitamin A. That's all important for the human body."

The omega fatty acids from sacha inchi are slightly different from those found in fish. That's not because the omega-3's in fish are a "secondary source," that is, processed from plants and absorbed into the fish through digestion. Fish produce their own omega-3's. It's because the molecules in fish and plants are mirror images of each other. But, says Bussmann, they have the same effect.

Bussmann and his colleagues initially collected sacha inchi in 2009 in the Mendoza forest region of the Peruvian Amazon, but Peruvians have been eating the seeds for thousands of years: at least, archaeologists have discovered 2000-year-old pots painted with plants that look remarkably similar. The plant grows deep in the forest, which, as Bussmann points out, makes it possible to harvest without disturbing the ecosystem.

The only problem with this wonder plant? Well, um, it's not really available in the U.S. yet. A cousin called Plukenetia volublis is currently sold at Whole Foods, also under the name sacha inchi, but it is, says Bussmann, far inferior to the new variety. The seeds are smaller, for one thing, which means they contain far fewer omega fatty acids, and are harder to extract from the fruit. The seeds of the new sacha inchi are five times larger and the fruits open by themselves.

So come on, health-food importers! The market for sacha inchi is wide open! And Bussmann promises there may be a new discovery on the horizon, yet another species of the plant with even bigger seeds. Stay tuned for the results of the next study.