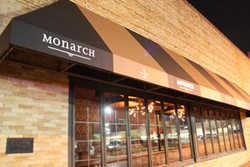 Monarch (7401 Manchester Road, Maplewood; 314-644-3995) announced today that it will close on Sunday, March 11, ending a nine-year run that featured much acclaim, including executive chef Josh Galliano being named only two days ago a semifinalist for the James Beard Foundation's 2012 "Best Chef: Midwest" award.

The announcement from owners Jeff Orbin and Aaron Teitelbaum gives several reasons for the closure:

Unfortunately, the St. Louis dining population has been unable to adequately support a restaurant of our caliber and size, in our current location on a consistent basis.

...Obviously, the economic conditions have greatly affected the frequency of customers choosing to dine at the higher-level dining establishments. And beyond that, restaurants also continue to battle with a multitude of 'discount dining deal programs,' which has a huge affect on smaller, quality driven independent restaurants. In addition to the above, Monarch also struggles with the sheer size of the existing 10,000-square-foot facility.

Orbin and Teitelbaum say they will announce future plans for the Monarch space later this year. We have a call into Galliano for comment. More to come.

Thank you for all the words of support. It's a very humbling experience. I'll help close down Monarch, find jobs for my cooks & close that part of my career. Over the next few months, Audra & I will look forward to our 3rd bambino & feeding all of y'all in a place of our own.

Gut Check has some suggestions on the future of Monarch -- and odds on what will actually happen.