Move Over Cauliflower: Chicken-Crust Pizza Is the New Low-Carb Darling

Find ZeroCarb LYFE pizza crust in a Schnucks near you 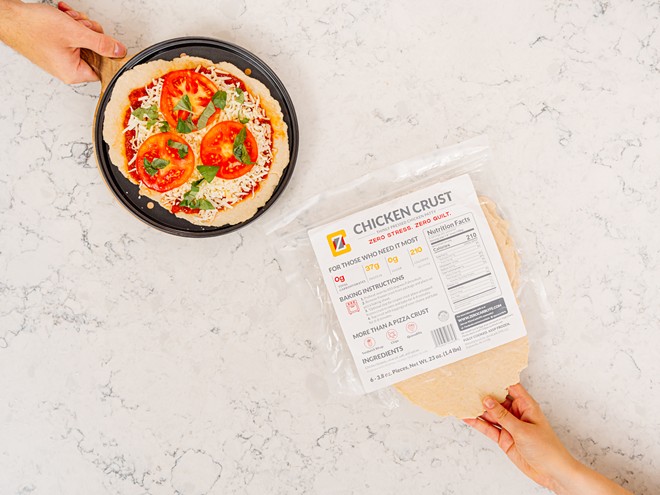 When you hear the words "chicken-crust pizza," what comes to mind?

Is it a comparison with the much maligned but probably delicious KFC Double Down, which featured toppings between two "slices" of fried chicken ? Is it Taco Bell's Naked Chicken Chalupa, starring a poultry shell?  Or is your noggin completely blank because the idea of a pizza where the crust is made of chicken is too downright wild to picture?

But what if that chicken-crust pizza wasn't strange at all? What if, in fact, it was fairly indistinguishable from any other grocery store pizza?

"You can just put the toppings straight on it and then put in the oven for eight to 10 minutes, and it's perfectly made pizza and tastes just like a thin-crust pizza," Omar Atia says. "When you bite into it, it crunches the same as a thin-crust pizza. It just tastes incredible."

Atia is the CEO and co-founder of ZeroCarb LYFE,  the maker of said chicken-crust pizza, which is now in 80 Schnucks locations, mostly around St. Louis, since October.

The company makes ready-to-cook frozen pizzas (sausage, buffalo chicken) and crusts, which can also be used as wraps. The crusts are all made from the  same four ingredients: chicken breast, olive oil, salt and spices. They're intended to be healthy, low-carb alternatives to pizza made from wheat flour.

Despite the simplicity of the ingredients, Atia says the pizzas don't taste like chicken. To make them, he says the company removes the water from white chicken and because of the meat's low fat content, it doesn't taste like much. Not a great look for chicken but good for chicken-based pizza.

The resulting product crisps well in the oven and tastes even more savory that flour-based crusts. Atia says it tastes better than cauliflower crust but still has that healthy element.

"[The company is] really about changing people's lives when it comes to food and the joy that can come from it," he says. "I don't believe that we should eliminate people feeling happy and joy when they're eating alone, or when they're eating together, and that's really what our goal is at ZeroCarb LYFE. We have this vision that you can still have a very, very fun experience, very joyful experience when you're eating, and at the same time, have it be healthy for you."

ZeroCarb LYFE, which is based in Indiana, came to life as a collaboration between Atia, a chemical engineer who had worked at companies such as Kraft Foods, ConAgra Foods and Dean Foods, and Chief Creative Officer Mohamed Aly, who had discovered the Keto diet as a way to manage his diabetes. He'd had the idea of the chicken crust as a way to still be able to enjoy pizza, but he needed someone to help him make things work.

The two launched the company in early 2020, developing a dual business that is both direct-to-consumer and sells to restaurants. Then, in April this year, the company entered the retail space, eventually finding its way to Schnucks.

To have that much growth in such a short period of time feels amazing, Atia says. But he has no plans to rest on his laurels, mentioning some chicken-based chips that will launch early next year.

"The best is definitely yet to come," he says. "There's just going to be some incredible growth that we also see in the near future."