Sauget, Illinois' own Gateway Grizzlies already have some of the best eats in baseball. But bacon cheeseburgers on grilled Krispy Kreme doughnuts and hot dogs buried in cheese, bacon, grilled onions and sauerkraut aren't enough. With the help of Favazza's Specialty Foods*, they're introducing a new appetizer at the ballpark. Trouble is, they don't have a name for it. Attend tonight's Grizzlies game at 7:05 for a chance to sample the snack and make an attempt to name it. The person who creates the best name will win Grizzlies season tickets for the 2012 season. 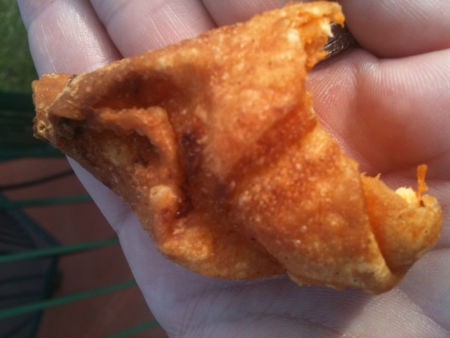 Gut Check got to sample the new appetizer last night while the Grizzlies were trounced by the Traverse City Beach Bums.

It's a crisp wonton-skin purse, somewhat shaped like a chicken drummette, filled with shredded chicken doused with a generous dollop of hot wing sauce. Finally! The great taste of wings without the mess!

It really is a snazzy idea. Like most samples, ours wasn't fresh out of the fryer, which affected the flavor. But when served hot with a side of blue-cheese dressing for dipping? They're definitely better than the doughnut burger and could give that loaded hot dog a run for its money.

The chicken Philly cheesesteak nachos would still win the best item on the Grizzlies' menu, but all bets are off if the new treat comes with a cup of the nacho-cheese sauce for dipping.

Because it's our duty to inform, we have refrained from entering the naming contest. That siad, if you head to the ballpark tonight and are stumped for a name, we suggest using any of the following:

*It's worth noting that Perry and Dottie Favazza, the owners of Favazza Specialty Foods, recently purchased Mr. B's Bar and Restaurant. They'll be serving many of Mr. B's recipes along with their company's appetizers.