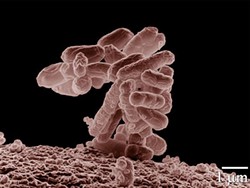 Image via
E. coli, magnified.
A terrifying article in today's New York Times should jump to the top of your must-read list. The headline of William Neuman's piece really says it all: "In E. Coli Fight, Some Strains Are Largely Ignored."

The most common strain of E. coli, responsible for most E. coli outbreaks in meat and other food, is O157:H7. In fact, there are numerous other strains of E. coli, one of which caused last month's outbreak in romaine lettuce.

Part of the problem is that so little is known about the rarer E. coli strains, which have been called the "big six" by public health experts. (The term refers to the fact that, after the O157 strain, these six strains are the most virulent of a group of related E. coli.) Few food companies test their products for the six strains, many doctors do not look for them and only about 5 percent of medical labs are equipped to diagnose them in sick patients.

Perhaps unsurprisingly to those of you who have been following food-safety stories over the years, the meat industry argues that it already does enough to combat E. coli in general, while government regulators are caught in the middle:

For its part, the Agriculture Department has said it is reluctant to ban the broader range of E. coli in beef until it has developed tests that can rapidly detect the pathogens. It expects to complete those by the end of 2011 and then study how often the six strains show up in the beef supply.

A friendly reminder that cooking ground beef to an internal temperature of 160 degrees will kill any E. coli bacteria.