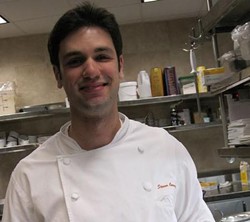 Robin Wheeler
Steven Caravelli is leaving Sleek for Araka.
A few interesting news items over the past couple of days. Monarch (7401 Manchester Road, 314-644-3995) will celebrate its grand reopening on Monday, August 2, according to a Tweet from the restaurant. Monarch is currently undergoing renovations. When reopened, it will feature a new bistro menu drawing upon the Louisiana heritage of executive chef Josh Galliano.

George Mahe broke the news at Feast that Steven Caravelli will leave his post as executive chef of Sleek to become the executive chef at Araka (131 Carondelet Plaza, Clayton; 314-725-6777). Caravelli, whose work at Hubert Keller's steakhouse has gained increasing attention over the past year, replaces Mark Curran, who was charged last month with burglarizing the restaurant.