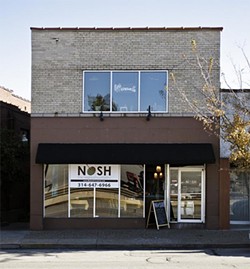 Jennifer Silverberg
The Nosh space in Maplewood, soon to become Home Wine Kitchen
The Maplewood restaurant Nosh has closed after less than a year in business. Its storefront at 7322 Manchester Road is mostly cleared out, and the phone number has been disconnected. I reviewed Nosh just six months ago and was generally pleased with the food there.

The space won't be empty for very long, though, Gut Check learned this afternoon. Cassy Vires confirms that she and her husband, Josh Renbarger, will open a new restaurant, Home Wine Kitchen, at that address.

Vires most recent turn as a chef was at Ernesto's Wine Bar in Benton Park. She also writes the "Tech School" column for Feast, (which first had the news of Vires plans for Home Wine Kitchen), for which she was nominated for a James Beard Foundation Award this year.