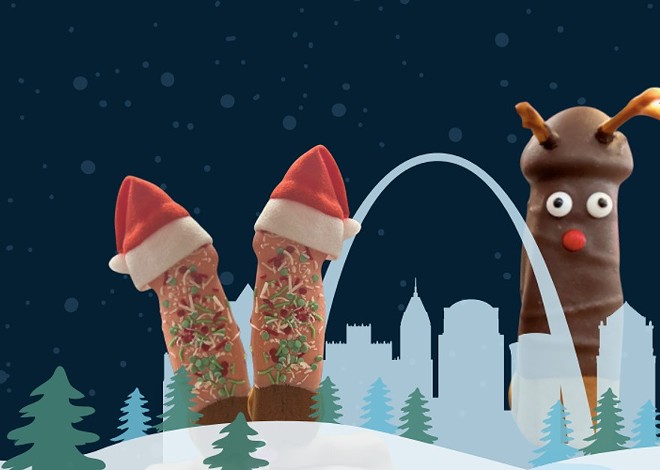 "I'm thinking about calling one Rudolf the Deep Throat Reindeer," James says with a laugh. "I don't know if I'm actually going to use that. But we really want to lean into what this stands for, and it's been fun to see how everyone else has leaned into it, too."

Such an over-the-top crass name might be a bridge too far for any other waffle company, but for James and his partner in business and in life, Austin Blankenship, it's totally on brand. Since (tee hee) popping up at their downtown dessert spot Bella's Frozen Yogurt (1021 Washington Avenue) this summer, the pair have developed quite the following for their penis- and vagina-shaped waffle company, Naughty Bits. To toast their success, Blankenship and James are hosting a Dickens Christmas Carol pop-up event on Friday, December 30, at Bella's, which will feature an entire line of holiday themed sexy waffles, hand-dipped for your pleasure.

"We'll be doing holiday-themed Naughty Bits, and Bella's will do holiday-themed cocktails as well," James says. "It should be such a fun time and a way to party after Christmas. We figure you were nice for Christmas, so now it's time to get on the naughty list."

Blankenship and James founded Naughty Bits this past August after a friend returned from Europe and shared with them her joy at finding edible penis- and vagina-shaped delights on her trip. The pair were intrigued, and after researching the idea found out that, while they were wildly popular in other parts of the world, sexy waffles had yet to pop-off in the United States. Using Bella's as a launch pad, the two held their first Naughty Bits event on August 27 and have appeared at other celebrations around town throughout the latter part of the year and are even looking into procuring a food truck so that they can make the Naughty Bits spectacle a regular part of the area's food scene.

As is typical of the Naughty Bits pop-up experiences, waffles will be hand-dipped in front of guests, a scene James describes as a flirty, wild experience.

"We put on quite a show," James says.

At the Dickens Christmas extravaganza, merry-makers will be entertained by a special guest dipper, drag performer and "the Sweetheart of St. Louis" Tabbi Katt, who will also serve as the event's guest host. James promises a good time and even notes that the festivities are clothing optional.

"Clothing donation optional," he emphasizes. "We're doing a clothing drive. It's optional, but we are encouraging guests to bring gently used items for us to donate. Just show up, bring some clothes, have a cocktail, enjoy some naughty bits and have a good time."