Nuoc Charm: Dao Tien is a peach of a Vietnamese bistro, and a slice of home-style heaven 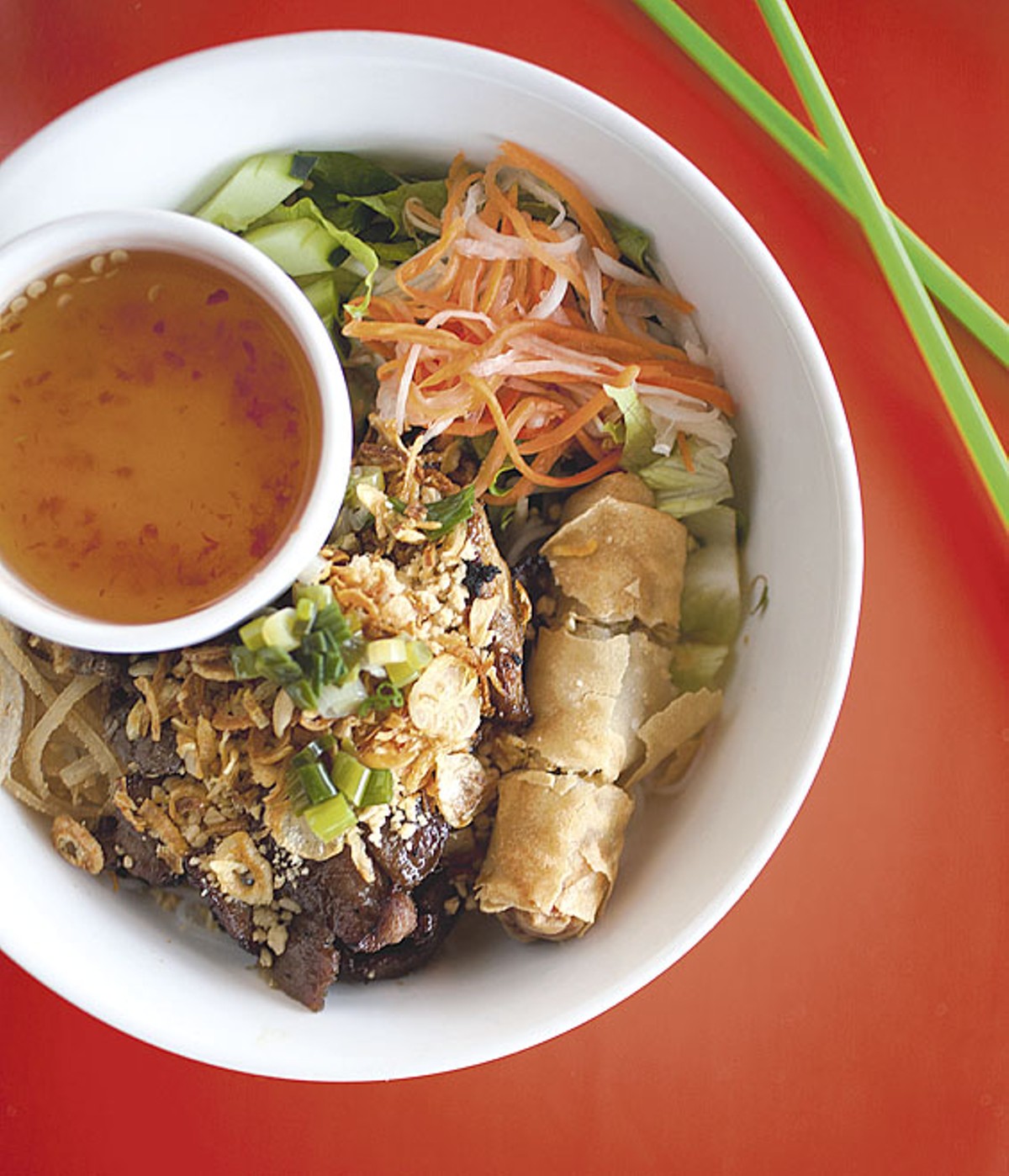 Nuoc Charm: Dao Tien is a peach of a Vietnamese bistro and a slice of homestyle heaven

Diane Dinh, the owner of Dao Tien Vietnamese Bistro, sees me coming even before I enter her restaurant this evening.

"I saw your car pull in," she says from her seat at the table nearest to the kitchen. "Same table?"

It's my fourth or fifth visit to this three-month-old University City restaurant, and by coincidence I've sat at the same table every time. When you're the owner of a small new restaurant, and you like to circulate among your guests, checking up on their meals, you tend to notice such things.

Mainly to convince myself that I don't have (yet another) psychological disorder, I sit at the table next to my ostensible favorite, closer to the restaurant's fish tank, which over the course of my visits here I've become obsessed with, convinced that the largest of its half-dozen fish is waiting for a chance to eat one of its companions.

"You want some tea?" Dinh asks. Outside it's cold and blustery, one of the few truly wintry days so far this season. Tea would be lovely. In Vietnamese she calls out to the lone server, busy instructing another diner how to add the fresh herbs to his pho, and I soon have in front of me a pot of green tea fragrant with jasmine. I'd have been tempted to back it with something more lingeringly warming, but Dao Tien doesn't have its liquor license yet.

Dao is Dinh's Vietnamese name; Tien is her daughter's. Together the two names mean "a peach from Heaven," and a peach theme runs throughout the restaurant. The logo features a peach; the walls and the curtains along the front windows boast a vivid color scheme of peach and green. The bright colors and the fish tank, which is framed with tile as if it were a fireplace, make the room feel airier than its actual size.

(A word about the restaurant's location: Although its address is on Olive Boulevard, it's part of a strip mall set a few hundred yards back from Olive, across from Jeffrey Plaza. To reach it you need to head south on McKnight Road from the Olive intersection.)

Though Dao Tien is Dinh's first restaurant in St. Louis, she has spent most of her life in the industry. Her parents owned a restaurant in Saigon. After immigrating to the United States, she ran a restaurant in Salina, Kansas. She moved to St. Louis six years ago and worked at the Lumière Place restaurant Asia before opening Dao Tien. The restaurant is a family affair: Her sons and daughters are on the service staff, and her ex-husband, Dinh Dang, is the head cook. (Diane takes charge of several dishes herself.)

While the menu here isn't as broad or as adventurous as at other Vietnamese restaurants in the area, it offers many of the most popular dishes, and what Dao Tien does, it does well. You certainly can't go wrong starting your meal with an order of goi cuon (spring rolls), one of a half-dozen appetizers. The filling keeps things simple: vermicelli, crisp mint and plump shrimp; on the side, for dipping, is a thick hoisin-peanut sauce. The cha gio (egg rolls) come with a side of the restaurant's excellent nuoc cham dipping sauce. Tart and spicy, nuoc cham is a signature Vietnamese condiment, its flavor profile drawn with bold strokes of fish sauce (nuoc mam), lime juice, vinegar and minced chiles and garlic.

Nuoc cham plays a key role in Dao Tien's rice platters, or com dia. These are built around broken rice (literally, grains that are broken), served in a mound alongside a selection of pork preparations. Com tam bi suon cha brings a thin grilled pork chop, a pile of shredded pork skin and an egg cake. The pork chop has a definite sweet note that the nuoc cham balances; the pork skin (with a few bits of meat mixed in) doesn't have much flavor at all, so the nuoc cham is essential here. The same, of course, goes for the rice. If nuoc cham doesn't bring all the zing your palate requires, you can supplement it with condiments like sriracha or hoisin. The egg cake, however, stands on its own, with a rich, earthy flavor thanks to ground, dried mushrooms and onion.

The broth that supplies the foundation for Dao Tien's pho (beef-noodle soup) has a brighter, saltier note than the more anise-intensive versions you commonly encounter around town. As is customary, the protein options run the gamut — from the minimalist (pho tai, featuring thinly sliced eye-round steak) to the hearty (oxtail) to the kitchen-sink cornucopia (eye-round and flank steak, Vietnamese meatballs, beef tendon and tripe).

Entrées are grouped under the heading "Specials." There are a few seafood options (mainly shrimp and fried or steamed tilapia), and some vegetarian noodle dishes, but omnivores should give immediate and serious consideration to the suon ram man: pork spare ribs hacked into slightly larger than bite-size lengths, steamed tender and then simmered for half an hour in a clay pot in a complex sauce. The sauce, made from beef broth that's salty-sweet and spiced with chile peppers, marries beautifully with the pork. The dish is topped off with scallion, fried onion and little bits of pork belly, adding a verdant note and — why not? — an extra shot of essential porkitude.

Another special, mien mang vit, is a soup made with duck, clear (a.k.a glass) noodles and bamboo shoots. Dao Tien's rendition was a triumph despite the fact that the kitchen had run out of duck and had to substitute chicken. The broth is more deeply flavored than your mom's homemade chicken soup even before you goose your bowlful with basil, culantro (much like cilantro, only stronger), sliced jalapeños and chile sauce. Duck would only make it better.

On this cold evening, the ribs and the soup are more than enough to send me home warm and happy, but as a friend and I prepare to leave, Diane Dinh calls out from the kitchen to our server, who in turn asks us to stay: Dinh wants us to try a dessert. This is che chuoi: bits of banana roasted until soft and very sweet, served in a thick sauce of condensed milk with salt and chopped peanuts.

It's only three or four bites, a refreshing antidote to the portions most restaurants serve (because most of us expect them to): simple and homey and a perfect nutshell metaphor for Dao Tien.