O+O Pizza Is Serving Some of the Best Italian in St. Louis 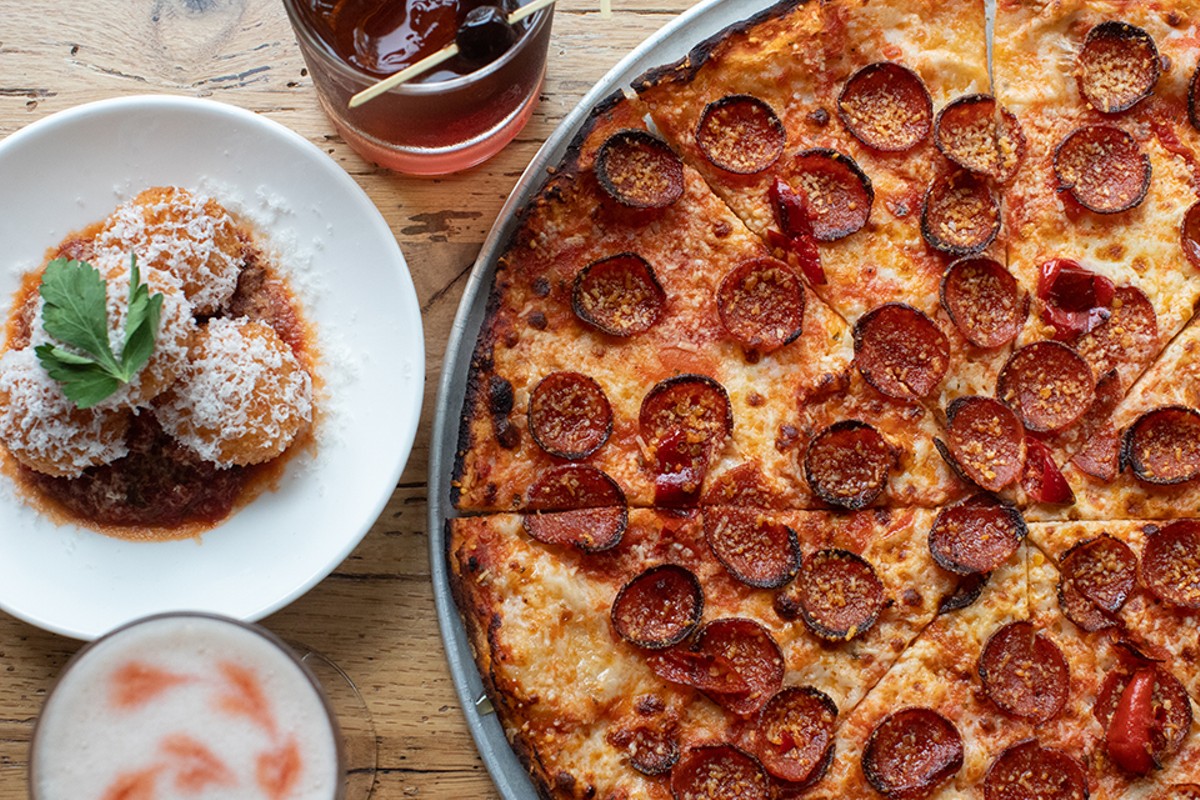 Mike Risk didn’t need confirmation that his eggplant parmesan was good. For twelve years he ran the kitchen of Trattoria Marcella, one of the city’s most celebrated Italian restaurants, where he got a lot of practice cooking the quintessential dishes that define the cuisine.

However, he learned that the eggplant parm he’d developed for O+O Pizza was the stuff of legends from St. Louis Blues captain Ryan O’Reilly. Over the winter, the hockey player developed such an affinity for the dish that he would order it often — sometimes multiple times a week. He was so enamored with the razor-thin layers of eggplant, chunky sauce and gooey cheese, in fact, that he wanted to share the love with his parents back home in Canada. With Risk’s help, he had two pans of the stuff shipped on dry ice so that they could see what he was raving about. It wasn’t winning the Stanley Cup or MVP that made him “Son of the Year”; it was the eggplant. 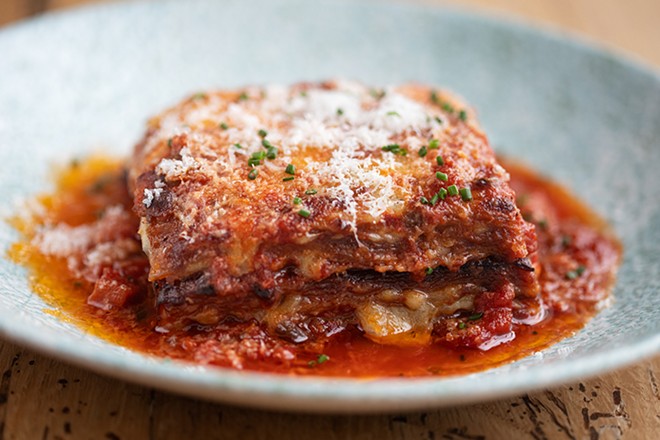 MABEL SUEN
That eggplant parmesan is so good it's been shipped internationally.

That Italian food good enough to be shipped internationally was flying under the radar for the better part of two years is shocking. However, that was the case with Risk’s Mediterranean-inspired evening menu at the Clover and the Bee, where he has served as executive chef since it opened in late 2017. Originally conceived of as a more casual complement to the powerhouse Olive + Oak, the Clover and the Bee quickly made a name for itself as an essential daytime spot. Known for its excellent breakfast and brunch fare, the restaurant’s wait times for a table on Saturday and Sunday mornings rivaled those of its impossible-to-get-into sister restaurant. And rightfully so.

What many people did not know, however, is that the Clover and the Bee was also open for dinner. Though its evening menu started out more eclectic, it became dominated by Italian cuisine over time. Risk couldn’t help himself; his experience at Trattoria Marcella made him proficient in that style of food, and he loved to eat it. So did Olive + Oak’s co-owner and general manager, Mark Hinkle, who, after returning from a vacation in Italy, encouraged Risk to go all-in on making the Clover and the Bee an Italian restaurant, at least during dinnertime. 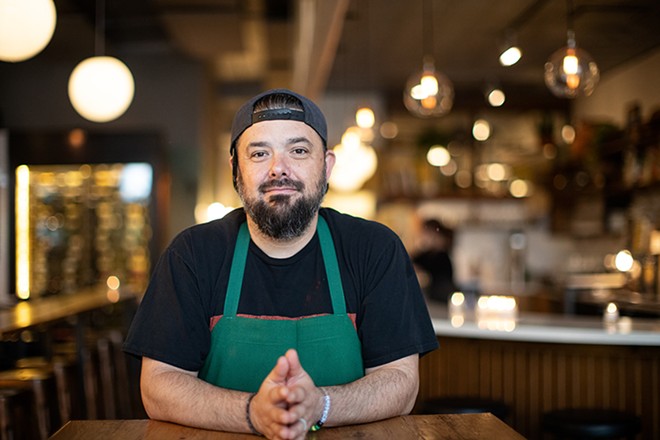 Even as the Clover and the Bee’s daytime reputation stole the evening menu’s thunder, Risk threw himself into his Italian fare. The effort set the restaurant group up perfectly when Olive + Oak moved from its original location next to the Clover and the Bee to its new, larger digs up the street. With the adjacent storefront vacant, Hinkle saw an opportunity to give Risk’s Italian food a spot of its own. With a decent part of the menu already sketched out, he and Risk finally had the space to go for it. In the initial stages of their talks, Hinkle wanted the new restaurant to focus on pizza. Risk balked; as much as he enjoyed pizza, he worried that the place would become just another pizza joint in an already crowded field, and he wanted to fully showcase all that he could do with Italian cuisines. After numerous talks, their visions morphed into the outstanding O+O Pizza, a celebration of pizza, pasta and Italian fare that has quickly become one of the best places in town to enjoy this style of food.

Risk may not have wanted O+O Pizza to focus exclusively on pies, but that doesn’t mean he skimped on them. Described as a hybrid of New Haven- and Roman-style pizza, O+O’s version is thinner and crispier than Neapolitan around the edges, but has a similar wood-fired speckle. It’s a wonderful canvas for toppings or is stunning when simply adorned, as is the case with the O+O Original, topped with subtly sweet, rustic tomato sauce, Fior di Latte (a type of fresh mozzarella) and pecorino cheeses. The ingredients are simple but powerful, and show why just a few well-prepared and sourced components can make something magical. 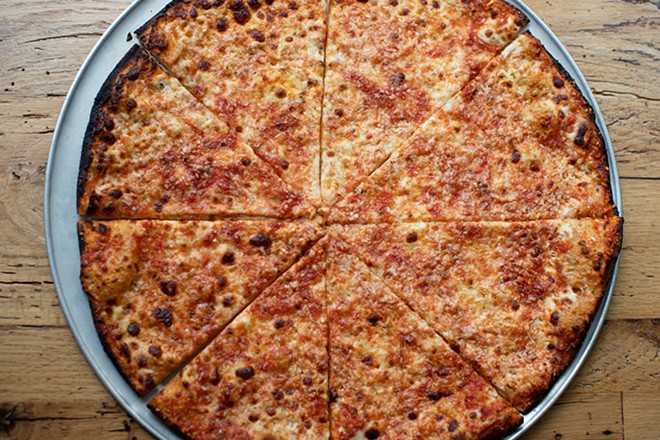 The prosciutto pizza is equally stunning. Here, just a tiny smattering of tomato sauce serves as the base for luscious burrata, butternut squash and prosciutto. God bless Risk for not overcooking the ham; though slightly warmed, the prosciutto retains its beautiful, silken texture. A drizzle of fig honey draws out its natural sweetness, as well as that of the butternut squash.

It’s difficult to order anything but that prosciutto pie, but one bite of O+O’s OG Pepperoni might steal its thunder. Here, the sauce and crust are a beautiful vehicle for small discs of Ezzo’s pepperoni, a fatty, paprika and garlic-forward version of the ubiquitous pizza sausage that many consider the best around. Fior di Latte and pecorino add richness, but the key to this pie is the Calabrian chili-infused hot honey drizzle that mingles with the deeply savory meat and vibrant sauce to form an otherworldly spicy-sweet-rich flavor. People are going so crazy for this honey that Risk started selling it by the jar and can barely keep up with demand. One bite of this pizza, and you see why his guests are eager to put it on everything.

Despite the restaurant’s namesake, Risk was determined to make O+O much more than a pizza spot. He’s succeeded. In addition to O’Reilly’s favorite eggplant parm, the menu is filled with a number of noteworthy, non-pizza dishes such as the Fiore Farcito, a stunning handmade stuffed pasta filled with carrots, parsnip and coriander. The vegetables are subtly sweet and pair beautifully with the tangy lemon cream sauce and sautéed kale that dresses the pasta. Cacio e pepe, another excellent pasta, is like a grownup mac and cheese. Casarecce pasta is tossed with pecorino, parmesan, garlic and black pepper — just a few, simple ingredients that add up to something special. The beef short ribs are another outstanding main course. The dish is like the most perfect pot roast on earth; fork-tender meat, carrots, potatoes and thyme-infused cooking liquid are ladled over mashed potatoes so fluffy they are like a cloud. 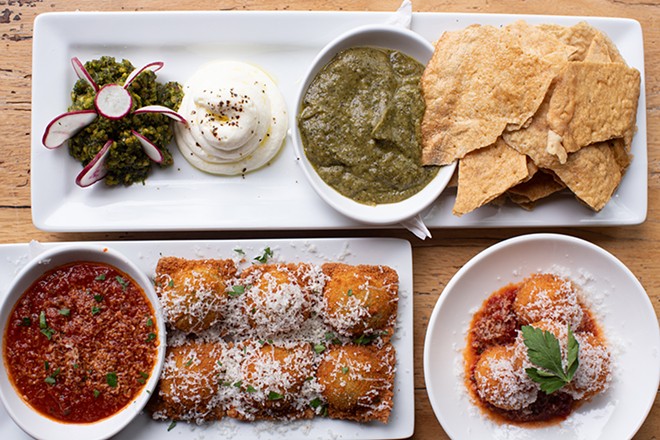 O+O Pizza also offers one successful small plate after another. Arancini is perfection of the form. Stuffed with fontina and mozzarella, the golden fried rice balls are a wonderful vehicle for soaking up Risk’s chunky tomato sauce. Pistachio pesto is a fun riff on the usual pine-nut-based spread. The dip is served with creamy whipped goat cheese, radishes and house-made crackers; the tang of the goat cheese pairs beautifully with the gently sweet pistachio.

The calamari fritti is enlivened with pickled vegetables and a delightful lemony garlic drizzle, allowing the gentle sea flavor of the squid to shine through. It makes you wonder why the oft-seen appetizer is so often served with marinara. Risk’s take on another ubiquitous appetizer, toasted ravioli, is equally outstanding. Handmade pasta is stuffed with beef, tessa and fontina cheese, which makes for a flavorful, more rustic textured filling than the meat paste typically used for the St. Louis staple. The extra effort translates into a truly exceptional dish.

Even tiramisu, a dessert that seems mandated to appear on every Italian menu on the planet, is special at O+O Pizza. Whereas the dessert can sometimes get mushy, this version maintains a crispness thanks to a base of brown-butter shortbread and chocolate-coated cookie crumbs. As good as it is, the must-try dessert at O+O is the chocolate almond olive oil cake, a chocolate cake so perfect it should be the standard against which all other chocolate cakes are judged. The brown-butter glaze and almond-adorned whipped cream topping only add to the glory.

If O’Reilly really wants to impress his parents, he should include this dessert in the next care package of Risk’s superb offerings. For those of us here in St. Louis, we should feel lucky that we don’t have to rely on international shipping to get a taste. 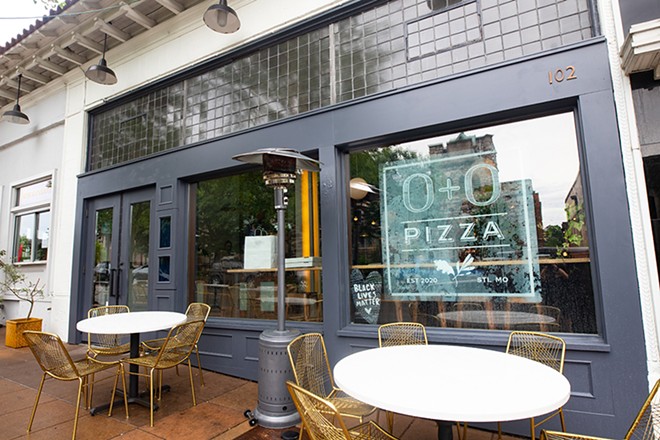