Welcome to Hidden Gem, Gut Check's short love letter to restaurants, coffee shops and bars that lie off the beaten path. These places soldier on in relative anonymity, beloved by their regulars, but largely overlooked by the greater populace. Hidden Gem will attempt to rectify these terrible oversights. Have a Hidden Gem of your own to share? Tell us in the comments. 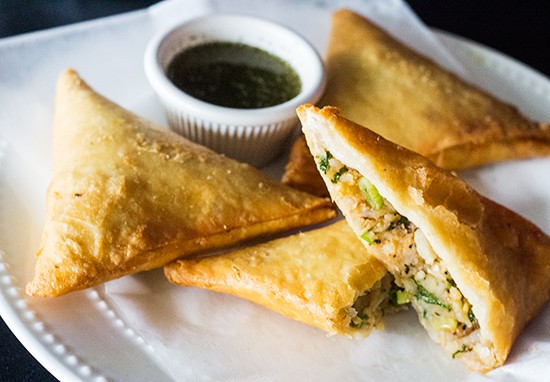 Flaky samosas stuffed with veggies and served with tzatziki. | Photos by Mabel Suen

Twenty-one-year-old Mohammad Noori originally dreamed up the plans for Oasis Shisha Lounge (6417 Hampton Avenue; 314-481-1993) with his younger brother, Qais, while they were teenagers growing up in south city. However, tragedy struck before they could complete them together. A car accident took Qais' life, and it wasn't until last November that Noori came across his brother's business portfolio and decided to continue with what they started. 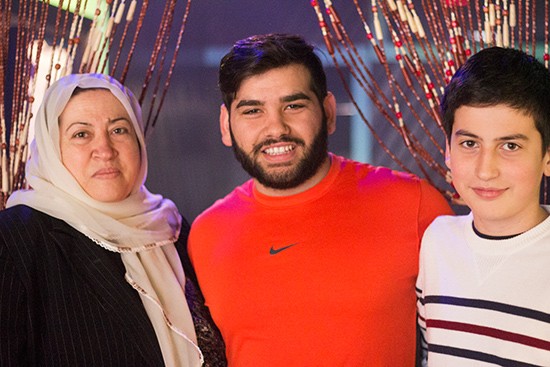 "Everything in here was what my brother had planned to do," says Noori, pointing out the space's renovations since its former life as Tumo's, an Italian restaurant.

The ceiling and exposed brick have been painted black, with sections of the walls given a facelift with bright teal accents. Shadows of the space's former life remain, however, including stained-glass windows dividing vintage booths. In the back room, labeled the "Xhale Lounge," Qasi's jersey adorns the wall, and raised seating topped with lavish pillows gives guests a secluded place to unwind. 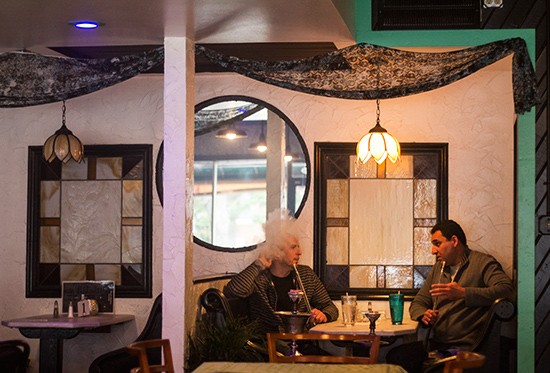 A look at the dining room.

"When we first wanted to open up a place, we said we're going to have a menu that complements the hookah, or a hookah menu that complements the food," says Noori. "Two weeks before we had our grand opening, I sat in the back room and had 30 different flavors of hookah and about seventeen different dishes.... I was taking a bite of every dish and smoking different hookah to find the best combinations. No matter what you eat from the menu, there's a hookah flavor that fits perfectly."

When our order of beef kabob -- marinated beef served with rice and a side salad -- hits the table, Noori recommends a mint or winterfresh flavor to provide a clarifiying, refreshing counterpart to the meal.

Continued on the next page.