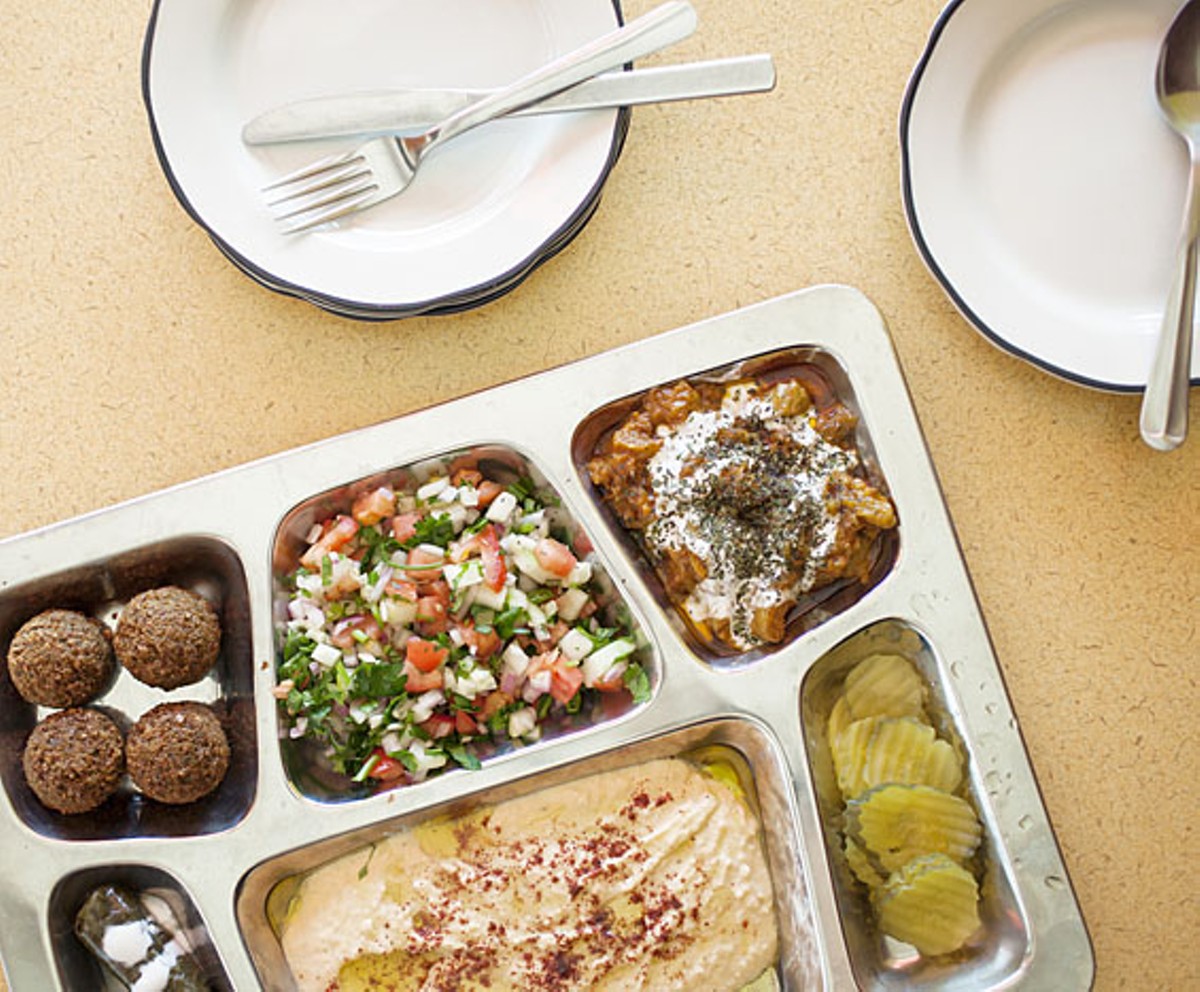 Waiting for my lunch during a recent visit to the reborn Sameem Afghan Restaurant, I heard the voice of owner Qayum Mohammad boom out from behind the closed kitchen door: "This is really good!" There was some cross-talk, the clatter of cooking, and then he exclaimed again, "It's really good!"

The kitchen door swung open and Mohammad strode toward my table — I was the only customer in the place at the moment — bearing a small plate and a big smile. "Try this," he said.

The plate held a dip of some sort and a couple of thick wedges of Afghan bread. I dragged a piece of bread through the dip and took a bite.

That smile again. You can't help but return it, though to do so with a mouthful of mystery dip would have been unseemly, so I opted for an affirmative nod. It was good: creamy, a little sweet, a little tart, a little astringent. Mohammad explained he'd blended hummus, eggplant and yogurt. This was no family recipe passed down through the ages. He'd just come up with it. It might appear on the menu soon. With that, he left me to finish my sample.

It was good to be back at Sameem.

When Mohammad opened Sameem on Grand Boulevard in 2005, the restaurant was the culmination of a fourteen-year dream for the Afghan immigrant, who over that decade and a half had risen through the ranks at Old Warson Country Club from dogsbody to food-service supervisor. Sameem closed in 2010, its loss tempered by the fact that Mohammad had opened a second restaurant, Kabob Palace, in west county. Still, for those of us who counted Sameem as a standout on South Grand's vibrant international dining scene — not to mention those of us for whom Kabob Palace's location in Manchester was a haul — its absence was glaring.

Our period of mourning was mercifully brief. Last summer I learned that Sameem would return to a new location on the western end of Forest Park Southeast's Grove district — a "very improved" Sameem, Mohammad told me a few weeks before it opened in January of this year. (This summer he shuttered Kabob Palace to focus his resources on Sameem.)

The new place is much smaller than the original, with seating for a few dozen in the single dining room. The Afghan rugs and paintings on the walls help make the space cozy rather than cramped, though when the restaurant is even moderately busy, it feels very crowded, and Mohammad advises weekend diners to make reservations.

As before, Mohammad mostly tends to the front of the house, while his wife runs the kitchen. The menu too is much the same: Afghan, Indian and Pakistani fare along with a few American-Afghan hybrid dishes, such as pasta with chicken in a curry-cream sauce, and, at lunch, straight-up American hamburgers, hot dogs and chicken strips.

I didn't try the chicken strips. Instead, I went back to old favorites: muntoo, golf-ball-size steamed dumplings of pasta dough wrapped around a mixture of ground beef and onion. This classic Afghan dish comes topped with lentils and a little more ground beef, a garlic-yogurt sauce and a sprinkling of dried mint. A well-meaning but dumb American (e.g., yours truly) might be tempted to call this dish "Afghan cuisine in a nutshell." Generalizations aside, it's as good an introduction as any — hearty, the meat gently accented by herbs and spices rather than spiked with chile heat as in Indian or Pakistani cuisine, with the tart, cool yogurt acting as a key counterpoint.

Those seeking a spicier dish might try the lamb or chicken karahi, which serves your choice of meat in a tomato-based sauce enriched with garlic and jolted with green chiles. The heat isn't fearsome, but it definitely builds over the course of the meal. A dish called butter chicken (also available with shrimp) brings a tamer, creamier tomato-garlic sauce, with a hint of curry and an assertive saltiness.

Appetizers include such staples as hummus: very thick and, for added unctuousness, served nearly submerged in a pool of olive oil. I especially like Sameem's take on sambosas, thin pastry-dough shells (four to an appetizer portion) stuffed with a mixture of potato and green onion and lightly fried to a crisp. Dipped in the accompanying vivid-green cilantro chutney, these are addictive.

Perhaps the best way to experience what sets Sameem apart is to order one of its Afghan beriani (or, as it's often transliterated biryani) dishes. It's not often that you trumpet rice, but the grains that make up the bulk of the beriani are incredibly flavorful — not merely ballast for other spices but bringing to the table a subtle character all their own.

Mohammad explains that he uses an especially fragrant rice called sella basmati, its popcorn-tinged flavor rounded out with a blend of warm spices including cumin, coriander, cloves, cinnamon and cardamom. For the lamb beriani I ordered, the rice and seasonings are stir-fried with chickpeas, spinach and green peas and served in a mound over a tender shank of braised lamb.

"It's good, yeah?" Sameem asks as I work my way through enough rice and lamb for two.