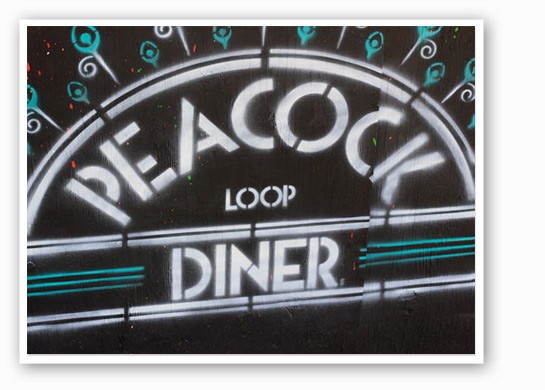 The Loop is getting its first 24-hour diner. | Nancy Stiles

Edwards chose the peacock name and theme because he felt it would appeal to people from all over the country and the world, as Washington University has so many out-of-state and international students. Edwards also says he has collected peacock items for years.

"There's something pretty magical about peacocks -- they're very unique creatures in nature and gorgeous, so it'll give me a chance to really design some fun, beautiful signage," he says.

Next: The Loop finally gets a grocery store.

The future Lofts of Washington University on Delmar. | Nancy Stiles

Next to the Peacock Loop Diner will be Global Foods Market, an international grocery on the ground floor of a five-story student-housing building at Delmar Boulevard and Eastgate Avenue. It'll be the second outpost for Global Foods; a Kirkwood location opened in 1999.

"Expansion was always in the back of our mind, but the opportunity didn't present itself till Wash. U. approached us," says Global Foods Market's Shayn Prapaisilp. "What better location than the Loop?" Prapaisilp says it will have products with students in mind -- smaller kitchens, cooking for one person -- but hopes to be a grocery for the entire University City community.

"The Loop is such a destination for people in St. Louis and from out of town, and people have been clamoring for a grocery in U. City for a long time. We bring a really unique and local concept to the area," he says. Both the Peacock Loop Diner and Global Foods Market are aiming to open in July or August 2014.

Gut Check is always hungry for tips. Email the author at [email protected] or follow her on Twitter.