If Blueberry Hill is the denim-clad, foul-mouthed, chain-smoking Rizzo, then Peacock Loop Diner is Sandy: bubbly, pink-poodle-skirt-wearing and saccharine sweet. The latest feather in "Duke of Delmar" Joe Edwards' already impressively plumed cap, the Peacock carries forward his love of 1950s kitsch, this time as a 24-hour diner that feels straight out of the film Grease. From the Skee-Ball to the neon lights that set the counters aglow, I half expected Frankie Avalon to appear from behind the curtains of the diner's rotating booth (the "Carousel of Love") for a rendition of "Beauty School Dropout." In other words, it's exactly what one would expect from retrophile Edwards.

Peacock Loop Diner is part of the new Lofts of Washington University development that includes, in addition to brand-new student housing, the grocery store and dining destination United Provisions. Like its co-tenant, Peacock hasn't had the smoothest sail in its first few months of operation. Complaints about everything from poor service and mediocre food to spotty cellular reception have given the fledgling restaurant an unsavory reputation. It got so bad that Edwards took action: In a recent press release, he cited several menu changes, referenced service improvements and even noted a booster antenna being installed to improve cell reception.

I dined at Peacock before these changes were made and must admit that the bad buzz really lowered my expectations. However, on my visits, it was immediately clear that the restaurant management had made efforts to right the ship. My first clue was the overly accommodating service -- the kind that typically results from a staff being pulled together for a "come to Jesus" talk. (If I had a nickel for every time someone asked to refill my drink, I could have fed my meter with change to spare.)

Peacock's entire menu of traditional breakfast and greasy spoon lunch fare is available at all hours of the day and night, seven days a week. For breakfast, I was impressed with the perfectly cooked three-egg omelet. I opted for a vegetarian version, generously filled with sautéed spinach, tomatoes, mushrooms and onions. The Swiss cheese inside and melted over the top made the dish extra rich and gooey. I was equally pleased with the "Finals Breakfast Sandwich," which consists of a fried egg, griddled ham steak, bacon, mixed-berry jam and Sriracha (both served on the side) sandwiched between two waffles. The subtly sweet waffles held up surprisingly well as a bread substitute, even after being doused in warm maple syrup. The savory and sweet breakfast sandwich was like a Monte Cristo's quirky cousin.

The buttermilk biscuits and gravy were spongy and tough; sawing through them with a knife required considerable effort. This was a shame because the creamy, mildly spicy chorizo gravy deserved a better canvas. The "Eggs Arnold" suffered the same biscuit issue. Topped with an overcooked fried egg, spinach, roasted tomato (the one redeeming component) and sparse hollandaise, this dry dish was a treasonous version of an oozing eggs Benedict.

On the lunch side of the menu, I enjoyed a simple appetizer of crispy fried spinach, dusted with some shaved Parmesan cheese for a salty kick. Thick-cut, battered onion rings were also well prepared -- I was able to bite through them without pulling out the entire onion.

Burgers at Peacock are thin, greasy and griddled on a flattop -- just what one wants from a 24-hour diner (and completely different from those at Blueberry Hill. Do not go in expecting them to be the same). The smoked-salmon club, however, was too much of a good thing. The dry-toasted wheat bread, scantly spread with unremarkable red curry sauce, could barely contain the roughly three-inch-thick mound of the cold smoked fish. The bacon, tomato and lettuce toppings slid off the top of the pile of fish and were relegated to one corner of the sandwich. As such, I got only one or two bites of all of the components together.

Our server touted the chicken-curry-salad sandwich as her favorite thing on the menu. I ordered it as she recommended, as a melt topped with Muenster cheese, and was not disappointed. Hunks of white and dark meat chicken tossed in mild yellow curry mayonnaise were heaped onto wheat toast and topped with the mild cheese. This simple, flavorful sandwich, is a rich, savory interpretation of classic café fare. 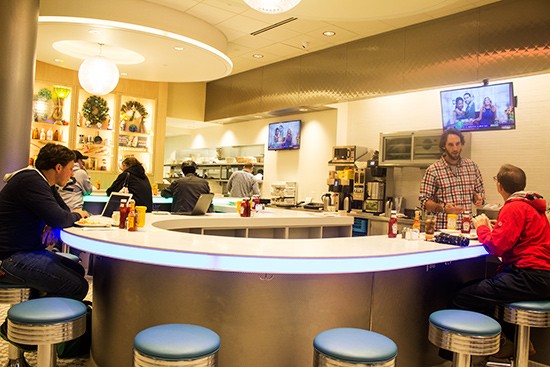 There are seats at the bar, as well as tables and booths. | Mabel Suen

The beauty of an all-hours diner is that we could order the red-velvet waffle for dessert in the middle of the day. The cocoa-flavored waffle, drizzled with melted sugary cream cheese, would have been plenty satisfying; however, the kitchen covers the plate in whipped cream and chocolate sauce which was too much for an already indulgent dish.

But overkill is welcome in the spiked milkshakes. Peacock offers seventeen varieties of its soon-to-be-signature boozy breakup remedies, including one called the "Human Sacrifice." Healthy pours of Patrón coffee liqueur, Sauza tequila and Kahlua are blended with chocolate and vanilla ice cream, cinnamon and cayenne pepper for a sweet and spicy concoction that is so stiff, the likeliest sacrifice is a drinker's dignity. It's a beverage worth the trip to this funhouse of a restaurant.

I'm not hopelessly devoted to Joe Edwards' Grease-y spoon yet, but if the upward trend continues -- and the spiked milkshakes keep flowing -- Peacock Loop Diner could become the one that I want.