Propaganda Will Close May 19 After 3 Years on Cherokee Street 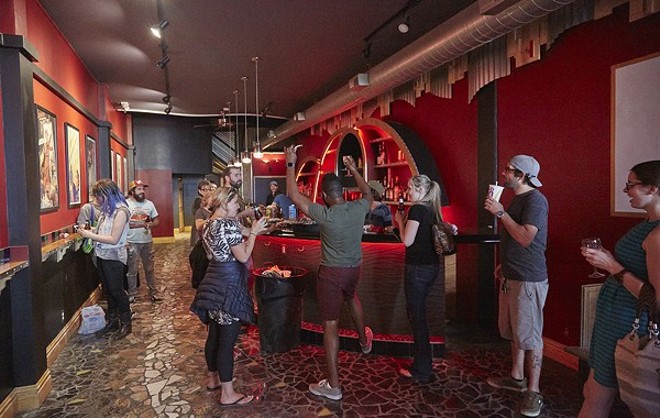 STEVE TRUESDELL
Friends of owner Tatyana Telnikova celebrate the opening of Propaganda in May 2016.
Propaganda (2732 Cherokee Street) has celebrated its last May Day: The Soviet-themed bar on Cherokee Street will close after service on May 19.

Owner Tatyana Telnikova, who grew up in Soviet Russia, launched the bar in May 2016 as a wink at her childhood. She announced the closure on the bar's website this morning, saying the project had become "financially non-viable."

"Due to a variety of circumstances we experienced a gradual dip in sales that is hard to recover from without a large time and possibly financial investment that I can not afford as I choose to focus on the HandleBar, and on my best project yet — a beautiful 8 month old daughter," she wrote.

Telnikova also owns the bicycle-themed HandleBar in the Grove and is an organizer of the city's World Naked Bike Ride event. She opened Propaganda after closing ArtBar, which had a two-year run at the same address.

While the ArtBar closure led to an angry groundswell on social media, with some patrons vowing to boycott anything that replaced it, Telnikova is aiming for a much less controversial farewell this time.

"[M]yself and the team would like to stay positive over the next week, and cheers with many of you to all the good times we shared at the bar," she wrote on the bar's website. "After all, those 3 years were great — we celebrated so much, made so many new friends, and have so many great memories! So please, come see us in the coming days to share stories, hugs, and to celebrate life!"