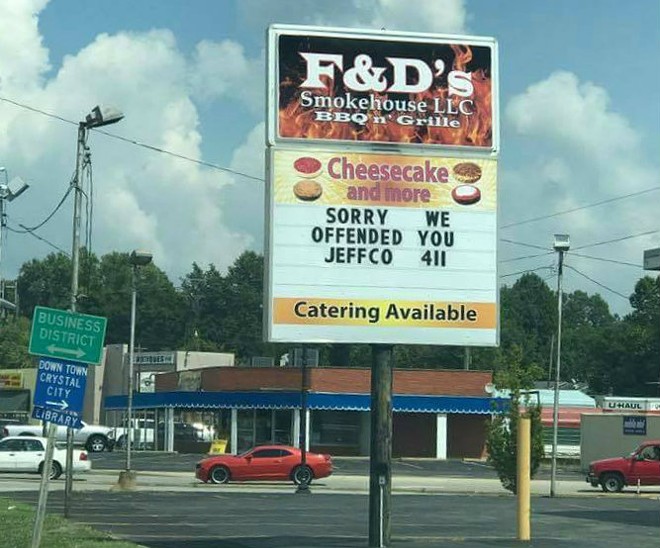 F&D's Smokehouse was just joking around.

The barbecue joint, which opened five weeks ago in Crystal City, Missouri, posted a message on its prominent roadside sign earlier this week that surely went right over the heads of small children — but had adults laughing out loud. "We rub our meat before we pull our pork," the restaurant boasted. Hilarity ensued.

Well, not entirely. This being 2017, some of the good people of Jefferson County were pissed — and naturally, they took to social media. Several good citizens took to the Facebook page Jeffco 411 about the euphemisms. "How unprofessional," one woman wrote. "Before the attacks start, yes, I do see the humor in it, but NOT for a business sign." 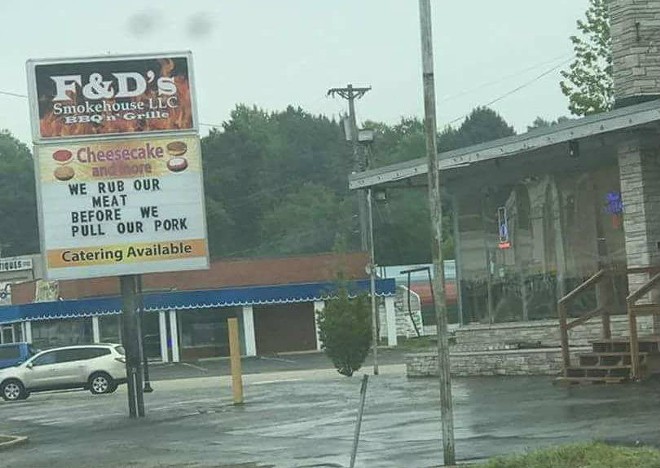 Fred Pachlhofer, who owns F&D's with Duston and Champagne Drury, says the restaurant acted quickly to address the offense. "We went ahead and took it down," he says. And then they added a contrite message: "Sorry we offended you Jeffco 411."

But that's when a near miracle took place. The administrators of the Jeffco 411 page announced they weren't offended — and, in fact, asked the eatery to put the sign back up.

The Jeffco post — "Put it back! Put it back! Comment below if you want them put the original sign back!" — drew 893 likes, a host of comments and more than 120 shares as of press time. And the people who appreciate a good joke were having a grand old time fighting the stick-in-the-muds in the comments.

Pachlhofer says he couldn't help but enjoy the contretemps. "They got so many likes saying you have to put it back up," he marvels. "I guess you can't please everybody; there's always a few who will be offended."

Still, rather than put the "rub our meat" joke back up, F&D's had a new message to replace the apology this morning.

COURTESY OF F&D'S SMOKEHOUSE
No word yet on whether Jeffco 411 has an appreciation for Pink Floyd. But Pachlhofer says he's only part joking — the self-proclaimed "Betty Crocker of F&D's," he personally bakes cheesecakes in a host of delicious flavors, including Butterfinger, Oreo and "Ooey Gooey Buttercake."

And if that's not enough to make the good people of Jefferson County bury the hatchet, clearly, they're hopeless.