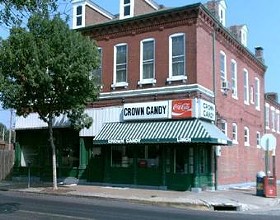 Our friends at Punching Kitty scored the food-news scoop of the week: A competitive eater who obliterated the famed malt challenge at St. Louis institution Crown Candy Kitchen is not who he claimed to be.

Let that sink in for a second: Seven malts in six minutes.

The feat is not in question. However, the identity of Kevin Ross is. Punching Kitty, in its first report on the story, concluded that he must be a competitive eater named Kevin Ross. But then the actual Kevin Ross got in touch with Punching Kitty to deny, deny, deny the achievement.

So who is this "Kevin Ross"? And why would he use Kevin Ross' name? Read the Punching Kitty article for the shocking conclusion.