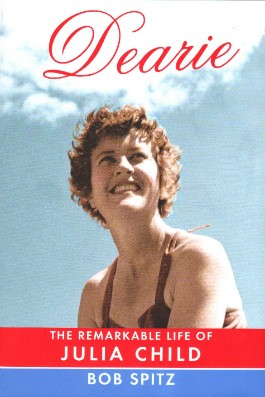 Image via
Dearie by Bob Spitz.

There are arguably two waves of cooking that unfolded in America during the 20th century: before Julia Child and after. Last August, right in time for what would have been Child's 100th birthday, historical biographer Bob Spitz -- of best-sellers The Beatles: The Biography and Dylan: A Biography -- released Dearie: The Remarkable Life of Julia Child, a comprehensive tome chronicling Child's life. Much like Child herself, the first half of the pages are filled with her family history, her childhood, her days spent boozing at Smith College, her time working in the United States Office of Strategic Services, the precursor of today's Central Intelligence Agency.

Almost halfway through the book we find a 40-year-old Julia Child learning to cook for the first time in her life -- and soon perfecting cooking French cuisine, soon becoming an international phenomenon with the publishing of Mastering The Art of French Cooking. By age 51 she had ascended to television stardom and forever changed the medium and cooking forever with the debut of smash-hit TV show The French Chef.

Always curious to learn more about the fascinating life of Julia Child, Gut Check called up Bob Spitz for a chat about the chef, why she hated Italian food and how she's essentially the Beatles of modern American cooking.

Click through for the chance to enter to win a copy of Dearie: The Remarkable Life of Julia Child.

Update: Congrats to commenter nikolembrown, who logged the following winning comment: "Bifteck Saute Bercy (Pan-broiled steak with shallot and white wine sauce). Any recipe she has that combines wine and butter is ALWAYS amazing."

Early in the book you explain in-depth, with much research, what cooking was in America before Julia Child. If you could talk a little about where the country was before, and how she forever changed the way we approach food and cooking.

Everything was quick, fast, easy. Women were -- everybody was, but in those days it was chiefly women -- encouraged to cook as quickly as they could without any of the flourishes or any of the wonderful care that goes into preparing a nourishing dinner. Mostly in the 1950s American were eating either casseroles or cheesy dinners. My own mother -- please forgive me Mom -- was a terrible cook. Once Julia Child hit the airwaves in 1963, everything changed. America fell in love with the idea of making nutritious dinners with the freshest ingredients, experimenting to incorporate French technique into their meals. People really began to care about that they ate. This was all done because of Julia. Julia kind of made it fun. She took the onus off all that time spent in the kitchen preparing a meal, and she told women especially to be bold and creative, and kind of step outside and away from the stove and take a bow. This was a completely new thing. Julia kind of lit the spark, and the fireworks are still going off today.

Where do you still see her influence?

Her influence is everywhere. All you have to do is turn on [a] food channel to see Julia's influence -- although I will say Julia would probably be appalled by what she'd see on the food channels today. Her influence began really in the dining craze that took off -- Julia got people interested in food, so they became interested in going out to fine dining places, and to watching cooks on TV prepare new recipes to try at home. Everybody who's on TV is nod to Julia Child.

One in particular --and this is a really interesting story -- Julia found a young man who she thought was a really, really talented cook, but he had absolutely no television personality, and he wanted to go on TV. She thought he was totally boring, he had no personality, he had no energy, so she got him to take media training courses. That was Emeril Lagasse. You can see where Julia's influence is. Just in trying to bring personality to the way food is presented on TV, and thus into our homes.

She definitely had personality to spare.

Personality trumps everything. And Julia was the first person to come along and become a star on TV. There had been plenty of performers before her, but Julia became a star just by being herself, by that personality, and that's truly what drew people to her. She was one-of-a-kind.

In all of your research of her early life and working for the United States government, traveling to France and finding her calling and returning home to become a television star, what surprised you the most about Julia Child?

What surprised me the most about Julia -- at the age of 40 she couldn't not only not cook, she couldn't so much as boil water. And at the age of 50, Julia had not only never been on television, but she didn't own a television set. So at the age of 51, when Julia comes along with her cookbook and takes the country by storm, she is made what I consider to be the most remarkable transformation in any life I've ever seen. She did this in her mid-50s. This isn't somebody who started as an ambitious person at the age of 20. She started in her 50s. It shows that there's hope for all of us, and you don't have to settle, and you can reinvent yourself -- and leave something very lasting and meaningful in the culture. I think that's what surprised me the most about Julia, what made my mouth drop: When I realized it was that important at that age, to know that she made that transformation.

Click through for the rest of our Q&A with Bob Spitz, and the chance to enter to win a copy of Dearie: The Remarkable Life of Julia Child in advance of Spitz's visit to Left Bank Books on Tuesday, May 7.