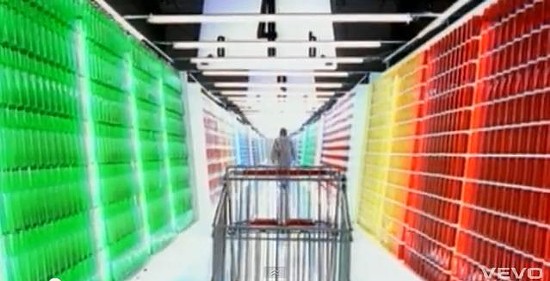 Gut Check put this evening's Radiohead concert at Scottrade Center on our schedule as soon as it was announced. We grew up with the band -- we bought "Creep" on cassingle! -- and over hundreds of spins of the band's records, we've noticed that on more than a few occasions in his lyrics, Thom Yorke has drawn upon food and eating images. Here are the ten best:

That's it, sir
You're leaving
The crackle of pigskin
The dust and the screaming

Yeah, this doesn't really have anything to do with food, and for the first decade or so after OK Computer came out, we never really made any connection, but now our love of barbecue has so warped our brains that whenever we hear this line, our first thought isn't about alienation, but ribs.

Despite its mixed metaphors, this vivid couplet is the sucker punch that ends this deceptively gentle acoustic gem from In Rainbows.

8. "Everything in Its Right Place"

Like many of the lyrics on the cryptic, gorgeous Kid A, it works better in context than on the page. Trust us, though: Thom did indeed wake up sucking on a lemon, and it was glorious.

Yorke sells these wonderfully ridiculous lines with a snarl. You'll never look at a flan the same way again.

Even if this wasn't Yorke's purporse -- intentional fallacy! -- these lines neatly sum up the first world's blind consumption of the world's edible resources.