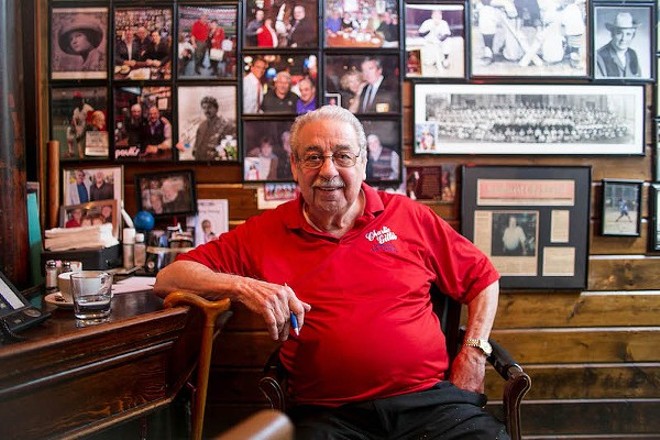 Jen West
Charlie Gitto, who died on July 4, made an indelible mark on the St. Louis restaurant scene.

Charlie Gitto Sr. loved to tell the story about how he became enraptured by the restaurant business. It was the summer before he entered eighth grade, and he got a job bussing tables at a steakhouse on the Hill. It wasn't necessarily the mechanics of the job that captured him, but rather the mystique that surrounded the place. He'd set the scene when he told of his time working there, so you could truly get the picture. Celebrities, athletes — a who's who of the St. Louis glitterati — were fixtures at the restaurant, and the maitre d' directed his staff like a conductor, making a beautiful symphony of restaurant magic happen. Gitto ate it up and knew that he wanted to be a part of that scene.

When he'd tell the story, Gitto got a wistful look on his face, as if he had stepped back in time to relay those experiences. But you didn't need him to give you the details about that job to get a picture of those days. All you needed to do was drop by his restaurant Charlie Gitto's Downtown (207 North Sixth Street, 314-436-2828) on any given day and watch him hold court as his restaurant heroes did all those years back.

Gitto worked the room at his downtown restaurant from its founding in 1974 (back then, it was a Pasta House; Gitto bought and renamed the place in 1978) nearly all the way to his passing on July 4 at age 87. For most of those years, the "Mayor of Sixth Street," as he was sometimes called, would hobnob with guests — many of them celebrities, sports figures and media personalities — getting to know nearly everyone who walked through his doors so he could make a personal connection. The dining room was lined with photos of Gitto and his impressive clientele, but what made the place so special is that he treated everyone as if they were a regular.

Gitto carried that spirit of hospitality, even into his later years, from a particular seat at the corner of the bar. No longer able to work the room, he greeted guests from his perch, just to the side of the front entrance, so he could see everyone who came in while maintaining an eye on every corner of the restaurant. Every last person who walked through the door was greeted by Gitto, as if they were an old friend. And many of them were. With such a long run in the business, Gitto saw the children of his regulars grow up and have kids of their own, often getting invites to weddings and birthday parties because he was like one of the family.

"You have to have good food — don't get me wrong — but you can't concentrate on only that," Gitto once said. "You have to have ambiance; you have to be out with the public so they know that Charlie Gitto is a real person. When I was younger I hit every table and introduced myself. I've met thousands of people over the years. It's that personal touch that makes us hold our own."

It's that personal touch that made Charlie Gitto's more than a place to eat and Gitto a restaurateur who made the St. Louis restaurant scene just a little more special.