Mitzi Uyemura has many stories to tell about her late husband Robert Uyemura that reveal who he was as a chef and person. Perhaps none explain him better than her anecdote about the time he reached out to an unsuspecting local farmer just getting his start in the business.

"He would always keep his ears open to find new farmers, and he found this little guy raising chickens on the edge of Ballwin," Mitzi recalls. "He was seven or eight years old — I think Rob found him on Facebook — and he reached out to him and said that he'd like to buy duck eggs from him. So this little guy would come in once a week with his dozen duck eggs and a few dozen chicken eggs, and Rob would always say, 'Why don't you go grab a soda out of the case?' but the boy would tell him his mom didn't let him drink soda. Rob would always smile and say, 'You don't have to tell her.' He really grew into that shopkeeper role, and he loved it."

Anyone who patronized Local Chef Kitchen (15270 Manchester Road, Ballwin; 636-220-3212), the Ballwin restaurant Rob and Mitzi started in March of 2016, knew that its chef and owner was much more than someone who came up with menus and kept the lights on at the business. He was the heart and soul of the restaurant, which represented the culmination of his passion for food, farming and education. When he died February 12 after a two-year battle with metastatic colorectal cancer, there was no denying that he was the light that animated the restaurant.

For that reason, Mitzi has made the difficult decision to permanently close Local Chef Kitchen. The restaurant's last day of service will be Saturday, June 13.

Mitzi did not come to the decision lightly. Though the stress of running Local Chef Kitchen overwhelmed her, she found comfort when she would be in the back of the restaurant and see Rob's handwritten notes or imagine him making the lengthy calls to farmers that she was now doing. However, things just weren't the same without Rob. She ultimately understood that closing would be the best thing for their family and his legacy.

Originally, Mitzi thought that she would close the restaurant immediately following Rob's death. Their friend, Renee Sackett, had organized a series of dinners originally intended as a fundraiser to help with the family's medical bills. However, due to his quick passing, they ended up serving as memorials for the beloved chef. Friends and family from around the country came out to remember Rob and share stories about how he impacted their lives. It seemed like a fitting sendoff for the chef and the restaurant that represented him so well. 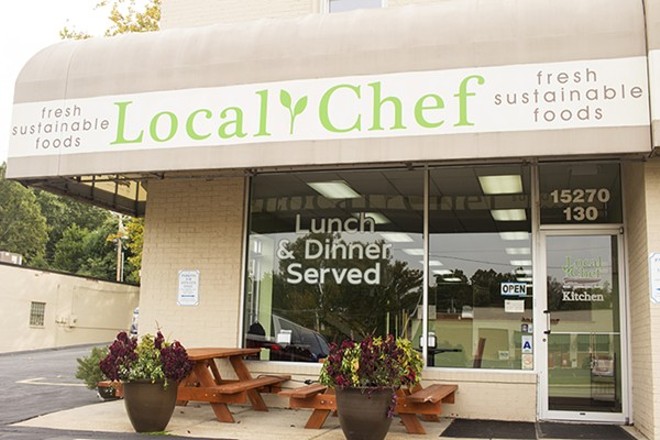 Then COVID-19 happened. The pandemic made restaurant work even harder than it was before, but Mitzi was more concerned about Local Chef Kitchen's employees.

"I felt like those dinners were such a tribute to him, and that maybe was the time we should close," Mitzi says. "Rob was really the ingredient that made it special. But then the coronavirus hit, and we were in a state of constant problem solving. [Our employees] Tony and Melvin have been so loyal, and I felt like I couldn't close then, because they would be thrown in with the thousands of other unemployed people in town. Also, people were so thankful we were open for curbside, because quality local food seemed to be at the top of their minds. It felt like what we were doing was important."

Ultimately, though, Mitzi felt that she had no choice but to close for the sake of her family.

"Owning and working in a restaurant is so much stress, a lot of work, and it's too much time away from the boys," she explains. "There was all of that when Rob was here, but I have to be careful to take care of myself so I can take care of my boys."

For Mitzi, helping her and Rob's sons, both high school aged, navigate distance learning and their grief has been a full-time job in itself. One of their sons was a senior this year, a factor that has compounded their already difficult situation. Immediately following Rob's death, Mitzi's inclination was to keep the restaurant open because closing it seemed like one more change in a seemingly endless line of changes. Once school finished for the year, what she needed to do became clear.

Mitzi is hoping that the next few days will give customers and colleagues a final opportunity to say goodbye to the man she's heard described as "the best unknown chef in Missouri." A graduate of the Culinary Institute of America, Rob worked in some of Dallas' top restaurants following school before joining the PB&J restaurant group. That job took him to YaYa's Euro Bistro in a Kansas City suburb, where he worked until he was asked to help the company open a location in Chesterfield.

Rob left YaYa's for a brief time to work at the now-shuttered Eau Bistro in the Chase Park Plaza Hotel. There, a farm-to-chef dinner with some culinary students ignited in him a passion for local ingredients well before it was in fashion in the larger restaurant industry. He began taking the culinary students on visits to farms and got to know many local producers. These relationships came with him when he returned to YaYa's in Chesterfield and turned it into an unlikely bastion of farm-to-table cooking.

Though he and Mitzi knew how difficult owning a restaurant would be, Rob could not shake his desire to create a place that's whole existence would be predicated on fresh, local ingredients. With that idea in mind, he and Mitzi opened Local Chef Kitchen in 2016. He was so committed to the restaurant that he worked throughout his debilitating battle with cancer, sometimes even wearing his chemotherapy pump as he went about the daily grind.

"So much of this is connected to Rob, so there was a comfort every day working there and seeing what he used to do," Mitzi says. "The emotional part is tough because of what he did to make it happen, but I don't want it to be less than what it was when he was there. It's better to have memories of when he was there talking to customers, bringing in a half hog on his shoulders or talking to farmers who were dropping things off for the C.S.A. I have those memories so we can end on a high note. That's what I want to do."