Rest in Peace Tom Coghill, the Soul of Iron Barley 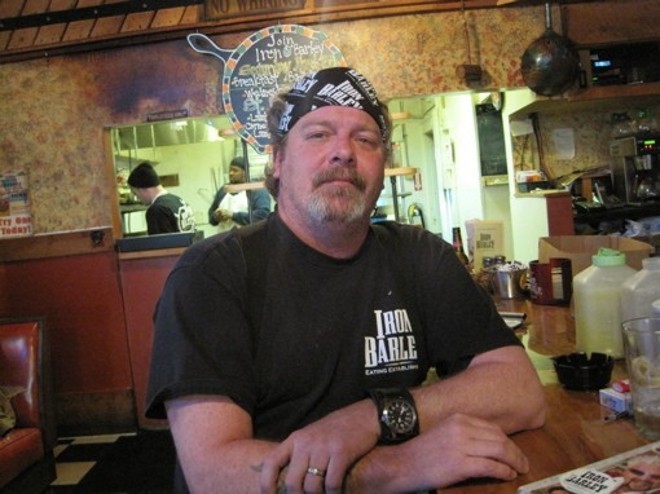 Update: A GoFundMe for the Coghill family has been set up by one of Iron Barley's longtime employees. "The best thing we can offer Gen right now is time. Time to grieve. Time to process. And time to make the right decisions for her family," the fundraiser reads.

St. Louis is mourning the loss of a legend. Tom Coghill, the chef and owner of Iron Barley, and its current incarnation, Iron Barley's High Hog Ridge (3367 High Ridge Boulevard, High Ridge; 636-671-9911), passed away unexpectedly on March 11th. Coghill was 57 years-old and is survived by his wife and restaurant co-owner, Gen, his three sons, Thomas, Charlie and Patrick, his grandson Henry, and his five sisters, Ann, Cissy, Carolyn, Janie and Susan.

Coghill began his career in the restaurant industry over four decades ago and made a name for himself in the St. Louis dining community thanks to stints in the upscale hotel circuit, including the Adam's Mark and the Hyatt, as well as Frazer's Restaurant & Lounge. However, he became a local restaurant icon because of Iron Barley, the beloved Carondelet neighborhood restaurant he opened with Gen in 2003. Known for its cast-iron cooking, smoked meats, creative hot dogs, and over-the-top sandwiches, Coghill's undeniable culinary talent allowed for outrageous dishes like the "Ballistic Elvis" sandwich to exist alongside flawlessly prepared mussels and pork. His legendary status was solidified after appearances on Drive-Ins and Dives, and Man vs. Food, shining the national spotlight on his humble stretch of south St. Louis.

In 2017, the Coghills shuttered the original Iron Barley location and moved their operation to a much larger spot in High Ridge, renaming the restaurant Iron Barley's High Hog Ridge. Not only did the new place allow the pair to reach a different audience and accommodate more guests, it provided a venue for Coghill's philanthropic work in support of veterans and Lift for Life Gym.

In a post on Iron Barley's High Hog Ridge's Facebook page announcing Coghill's passing, Gen described how the love he had for his family and cooking infused everything that he did.

"Tom and I were together since 1983 and we got married in 1987," Gen says. "We had our three sons, and I can’t even begin to tell you how proud he was of his sons. When he would talk about them, he stood taller, smiled broader and I think even his chest got bigger. We opened Iron Barley in May of 2003, and so it began…The True Love Story and passion he had for cooking. For making people happy. For always giving to others. And he was always so humble in doing so. There are so many people here we have touched, and so many to call a friend. I’m thankful for you all and for all the messages that you have sent me. We always had so many obstacles to jump through, but together as a family and with all your support we always made it through. Thank you."

A visitation for Coghill is slated for this Friday, March 18th, from 10 a.m. until 2 p.m. at Kutis Funeral Home in Affton. Funeral services will immediately follow.

The family will also have a celebration of life for Coghill this Sunday, March 20th, at the High Ridge restaurant. The event will take place from 11 a.m. until 6 p.m., and is open to anyone who wants to share stories, memories and toast a beloved part of the area's dining community. For those who can't make it, the post encourages people to take a moment to remember Coghill in the most appropriate way imaginable.

"Have a glass of Guinness, raise it high and cheers to Tom. We will meet again."