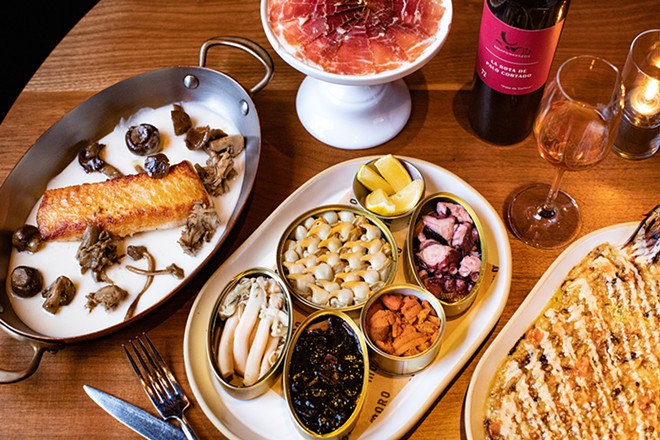 If you ask Ben Poremba why he wanted to open a place like Bar Moro (7610 Wydown Boulevard, Clayton; 314-296-3000), it has little to do with serving the ideal Spanish tortilla, perfecting a croqueta or bringing to life a vibrant glass of gazpacho. It's why he didn't obsess over cookbooks when sketching out Bar Moro's offerings but instead delved into the peninsula's history, politics, movements and art. "Food is culture," Poremba likes to say, and for him, Bar Moro represents a part of the Mediterranean that he has yet to explore as completely as others — one that has always fascinated him because of its North African influence and significant Jewish culture, the two identities that are expressed in him through his maternal and paternal heritage, respectively.

This approach is the secret to Bar Moro's success, not as a Spanish restaurant but a snapshot of what it feels like to dine in Spain, in all of its rustic, sexy glory. It's a transportive experience the moment you walk through the front doors from the tree-lined, Tudor-leaning Moorlands neighborhood of Clayton and into the sleek, Iberian eatery. The space is tiny, with roughly 20 table seats and room for about eight more at the bar, making it next to impossible to pass through the room without brushing up against someone you've never before met. The dim lighting allows the fantasy that this is a good thing. Add to this the black-on-black walls and banquettes, gem-studded fishing nets that hang from the ceiling, a leg of jamón set into a stand and displayed on the bar top and a surrealist mural by local artist Edo Rosenblith that, while distinct in its own style, nods to Spanish surrealist art, and you get an immersive atmosphere that feels like the sort of restaurant you'd find on a Madrid side street.

Poremba's style is a dominant feature of his persona, which is why it feels like he was meant to take the reins of such a special restaurant space. Prior to Bar Moro, the micro-storefront housed Billie Jean, iconic restaurateur Zoë Robinson's gone-too-soon spot that felt like the pinnacle of her storied career. Like Poremba, Robinson put as much thought into design elements of her properties as she did into the food (this is not at all a knock on the food but drives home just how important aesthetic considerations were to her as part of the overall experience), so his stylish presence in this space makes him a natural successor to his dear friend. 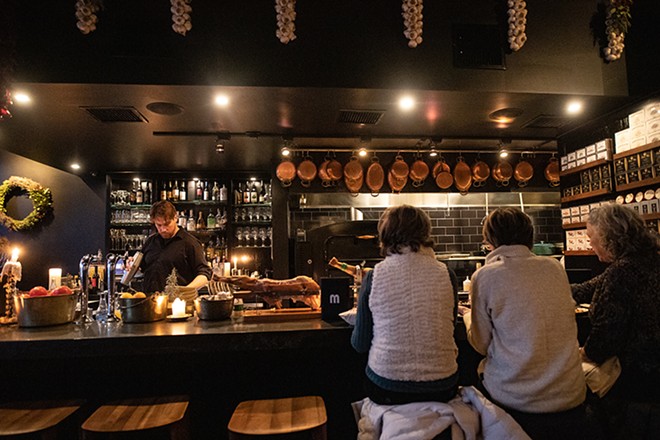 Food writers, myself included, love to talk about dining experiences as being transportive — a beautifully prepared Cuban sandwich can whisk us away to Havana; a soul-stirring khao soi brings about the feeling of being in northern Thailand. What's so interesting about Bar Moro is that Poremba takes this a step further. The restaurant is not simply evocative; he has masterfully captured the actual experience of dining in Spain. When we chatted for this review, Poremba said one of the greatest compliments he's received in his culinary career came from a Spanish expat who had actual tears in her eyes when she expressed how much Bar Moro felt like home. This is a feat that could only happen when all elements come together to create a special kind of alchemy, and though I have spent much of this text harping on the aesthetics, this magic could not happen without truly excellent food that captures the essence of Spanish cuisine.

Gazpacho is the initial proof of this kitchen's talent. Served alongside a shot of gin, the vibrant, chilled tomato soup has a beautifully smooth texture; the tomato's tartness activates the palate for what's to come, but when sipped with a bit of the gin, it takes on this deeply savory, white-peppery flavor that adds complexity. Similarly, pops of Poremba's private label caviar punctuate a luxuriously creamy egg-salad-adjacent concoction with notes of brine and subtle sea taste. If the gazpacho's brightness makes you sit up in your seat at attention, the egg and caviar, served with toast points, makes you sink back and bask in the overt decadence.

That unapologetic luxury is the through line at Bar Moro, with the $35-per-ounce jamón Iberico standing as perhaps the clearest example. The intensely nutty aged meat, sliced as thin as a hand can get it, is gently placed atop a marble stand like porcine petals. Generous fat is marbled throughout the meat; when placed on the tongue, it melts like butter. Think of prosciutto as delicate pastel silk and jamón as jewel-toned velvet. 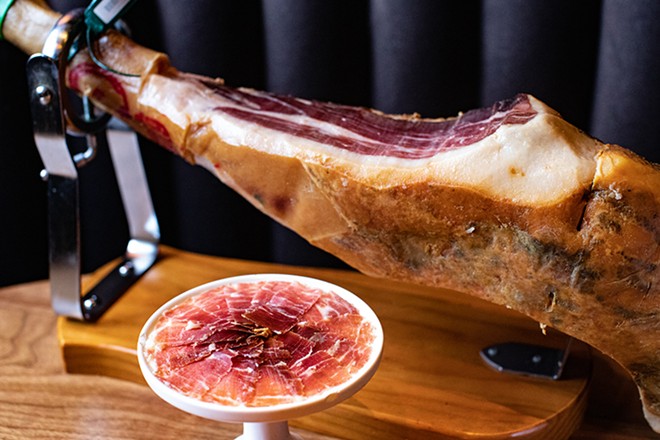 Mabel Suen
Jamon Iberico is sliced by hand to order.

One of Bar Moro's most notable luxuries is its conserva list, a comprehensive selection of tinned seafood, imported from Spain, that, while nodding to Spanish tradition, has become one of the world's biggest food trends over the past couple of years. Of the several offerings, we tried shockingly tender scallops that were kissed with gentle smoke and paprika octopus, both of which were not only delicious but just felt sexy.

Three different toasts each offered a completely different experience. The first, which featured fresh anchovies atop a pickled pepper, was a master class in balance. A fava bean version paired the pureed legume with mouth-puckering lemon and a dusting of nutty cheese that refreshed the palate after so many intense flavors. My favorite, the pan con tomate, was shocking in how such a simple combination can yield such intensity. The flavor, equal parts olive oil and tomato jam, is one I cannot get out of my mind.

The berenjenas quemadas, an eggplant dip, was equally haunting. For this dish, the kitchen infuses the pureed eggplant with honey and tahini, places it atop charred strips of the purple vegetable, then accents it with sweet tomato pulp and sherry. There's warmth, smoke, tartness and a very subtle hint of mint — a mélange of flavors that nods to the eastern Mediterranean and North Africa. 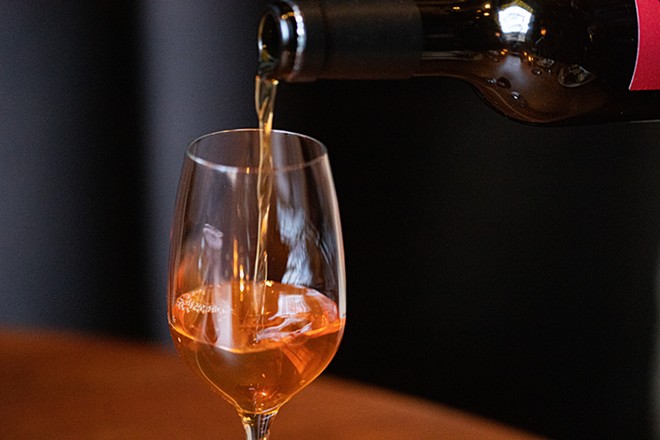 Pescado al pil pil, or pan-roasted sturgeon, pairs the meaty fish with various varieties of mushrooms — some smoky, some creamy, some intensely earthy — that add depth to the outstanding clam garlic sauce that accents the dish. This mouthwatering, savory nectar was so perfect I found myself soaking up every last bit with pieces of the crusty bread left over from earlier courses.

None of this comes without a price, though, and I'd be remiss if I failed to note that Bar Moro is quite expensive. There is a reason for the price tag; Poremba is offering truly fine food, much of it imported and all of it of the highest quality you can get. He leans into this without apology, and if you want to go on this magical journey with him, you must surrender to this and tell yourself that it's cheaper than a plane ticket to Madrid (though if you follow Scott's Cheap Flights, not that much cheaper).

However, if you think of value for what it really means — what you get versus what you pay — Bar Moro is a worthy experience. More than simply a restaurant, this masterful representation of Spanish dining culture is a window into a world we are privileged to witness from our corner of the world — and that is priceless.